Things to See and Do in Oak Park 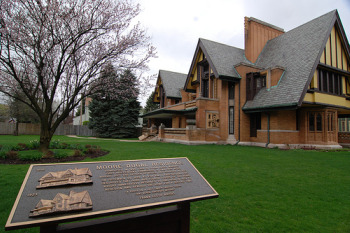 Oak Park is one of Chicago’s many large suburbs, but it does hold some appeal for tourists visiting the city. Located on the west side of Chicago, just 10 minutes from the city, it is best known for its connection to famed architect, Frank Lloyd Wright.

Wright built many homes in the Oak Park neighborhood, including one of his first projects, the Winslow House. No visit to Oak Park is complete (and in fact, it’s usually the main reason people visit) without paying homage to one of America’s greatest architects.The Frank Lloyd Wright House and Studio was Wright’s residence and workshop for the first 20 years of his career. Visitors now come to tour the house and learn about Wright’s groundbreaking design style.

The Frank Lloyd Wright House isn’t the only attraction with a famous connection in Oak Park though. The city was the birthplace of Ernest Hemingway, and visitors come to see the house where he grew up and learn about his early years and writing career at the Ernest Hemingway Birthplace Home and Museum.

For families, the 216-acre Brookfield Zoo and the massive Garfield Park Conservatory, one of the largest indoor conservatories in the country, are the main draws. Oak Park is also home to the Wonder Works Children’s Museum and the Maywood Park Race Track, which offers harness-racing. Though the two don’t warrant a special trip to Oak Park, they can help fill out a day of family fun in the area.

Getting to Oak Park from Chicago is easy, and doesn’t require the use of a car. Metra’s Union Pacific West Line will get you to Oak Park makes the trip from Union Station in less than 20 minutes and costs just over $2 per person each way. town Chicago (Union Station) in under 20 minutes. The ride cost just over $2 each way. Once there, you can get around the downtown area by foot, or jump on the local Pace bus.