What to Wear in Chicago in Fall 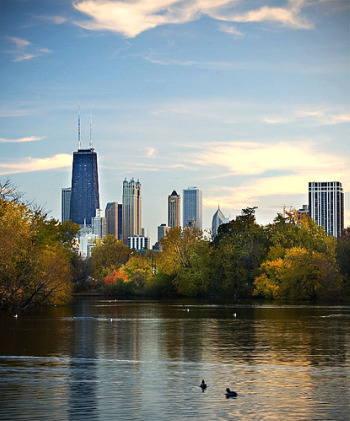 Fall is a beautiful time to visit Chicago, and one of my favorite seasons in the city. The days are warm, with just a bit of crispness to the air, and nights slowly begin to turn cold. As the calendar flips to October, the leaves begin to change into vibrant hues of red, yellow and gold, and then fall to the ground where they crunch underfoot. Most of the summer festivals are over, but there’s still lots to see and do, including the annual Chicago Marathon, which is held in October, and the McDonald’s Thanksgiving Day Parade. There’s a special feeling in the air in fall, as Chicagoans seem to get a renewed burst of energy – one last hurrah before the cold winter sets in.

Of course, like most autumn seasons in the US, particularly in the Midwest, fall can be a bit unpredictable in Chicago. We’d have snowstorms, cold snaps, and heat waves – one year it snowed several inches the first week in November and two years later, it was over 95 degrees in mid-October. If you’re packing for a short trip to Chicago, monitor the weather closely before you leave and account for a shift of about 10 degrees in either direction. If you’re packing for a longer trip, you’ll need to do a better job covering your bases, but you can still bring everything you might need to stay comfortable in Chicago in Fall. Here’s what you need to know about dressing for the season.

As fall moves from September to December, the temps decrease, though there are still some surprised. In September, temps will generally range from 60-75; in October that drops from 45-65, in November it goes down to 35-50, and by the time if officially becomes winter in December, it may be as cold as 30-40 degrees.  Chicago’s rainiest month is actually June, but the fall still experiences quite a few wet weather days.

From September to mid-October, be sure to bring a light raincoat and umbrella. From mid-October to around Thanksgiving, a light coat will generally do during the day, but after the holiday you’ll likely be more comfortable in a heavy winter coast, hat, scarf, and gloves. Winter boots or waterproof wellies are a good idea and will not be out of place in the city.

As in other seasons, fall is a time for layering. If you’re spending your day sightseeing and going to museums, you’ll constantly be going from very cold to warm and crowded. And during the day, you’ll be much warmer than at night when the sun has set.

For an outfit than can take you from day to night, no matter what the weather, I suggest jeans or khaki pants and t-shirts or Oxford shirts for men layered with a sweater or jacket. For ladies, jeans with a cardigan, sweater, or jacket are appropriate, as are heavier dresses or skirts with tights, boots, and a jacket.

During the day, jeans will be fine anywhere you go. At night, most locals dress it up a bit for dinner. Ladies switch to trendy jeans with heels or opt for dresses and skirts with boots. Men pair dark jeans or trousers with sweaters or sportcoats.

Chicago style overall is pretty casual but trendy, but if you plan on going to a nicer restaurant or for a romantic night out, you’ll want to dress up a bit more. Men can get by with a button-up Oxford shirt and khakis, trousers, or even nice dark jeans with loafers; a suit and tie isn’t required except at a small handful of places. A simple dress, some heels or heeled boots, and a nice coat is a great fall ensemble for women.

For a long weekend, I suggest ladies bring a jacket, 1 pair of jeans, 1 casual skirt and tights, 2-3 long sleeve shirts or t-shirts for layering, 1 dressier shirt, 2 cardigans, and 1-2 heavier dresses that can be dressed up or down. For footwear, a pair of sneakers (later in the season swap these out for boots), a pair of flats, and a pair of heels will cover all bases.

For men, 1 pair each of jeans, khakis, and trousers, 1 pair each of sneakers, and loafers, 3-4 button-up shirts, 2-3 sweatshirts or sweaters and a jacket will keep you clothed for any situation. For both men and women, a hat, gloves, and scarf will become necessary closer to December.