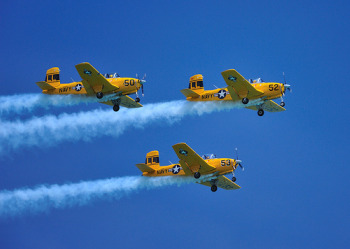 The Chicago Air and Water Show takes place over Lake Michigan each August, and draws over 2 million spectators to the event, which is the largest free event of its kind in the US. 2008 marked the 50th anniversary of the Air and Water show. This year’s event -the 53rd – will be held August 20 and 21, 2011.

What is the Air and Water Show?
The Chicago Air and Water Show appeals to kids and adults. Kids, of course, will be amazed by the planes, which swoop across the sky over the lake, circle over the city, and buzz past the skyscrapers of downtown.

But even adults will enjoy the show, and be impressed with the acrobatic skills of the high-tech planes. The U.S. Navy Blue Angels and U.S. Army Parachute Team Golden Knights will both make appearances at the show, which runs from 11am to 4pm Saturday and Sunday.

Is there a schedule of performances?
There is no set schedule – the order of the planes is determined the day of the show – but you can count on the headliners going on last, so if you can only make it for a portion of the show, plan on at least being there from 2pm to 4pm.

Where’s the best place to see the show?
The show takes place on and above Lake Michigan from Fullerton to Oak Street, with North Avenue Beach as the focal point. My preferred spot to watch from is on the couch at my friend’s 34th floor apartment, looking through her floor to ceiling windows as I sip a cold beer and enjoy the AC. If you’re not lucky enough to know someone with such prime real estate, you’re best bet is to hit the beach. Go early to stake out a good spot.You can also watch from a boat in the lake – restricted areas are governed by the Coast Guard though so be sure to obey their directions. If you’d rather be indoors with an elevated view, head to the Signature Lounge in the Hancock Building where you can enjoy a few pricey drinks while you watch the show.

What can I bring to the festival?
If you’ll be watching from the beach, bring a blanket, beach chairs and a cooler. Load up on plenty of snacks, water, sunscreen, a camera, and an umbrella or poncho if the forecast calls for rain. Tents, flag poles and large umbrellas are not allowed, nor are pets, weapons, BBQ grills, or alcohol.

Where can I eat nearby?
Most people just pack a lunch, but if you want to grab some food before or after, or just need to escape the heat, here are some easy options for places to eat near the Air and Water Show.