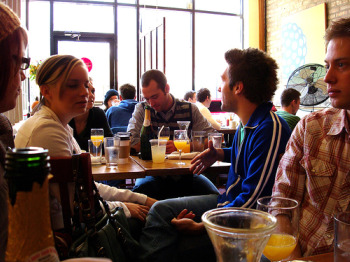 Brunch in Chicago isn’t just a late breakfast on Sunday morning, it’s a whole ritual that involves good company, creative dishes, and often copious amounts of mimosas and bloody marys. Here are some of the best spots in the city to indulge in the perfect Chicago brunch.

Orange
Even with six locations in the city, each location of Orange still regularly pulls in the crowds, especially on weekends. Come early (or come once the brunch rush is over, around 2pm) or expect to wait, but don’t worry, tables tend to turn over quickly. With brunch entrees that can only be described as “whimsical”, Orange doesn’t take itself too seriously. Menu options include “fruishi” (fruit cut and shaped to look like sushi rolls), cinnamon roll pancakes, chai French toast, omelets, and eggs Benedicts. Orange also offers a variety of fresh-squeezed juices, which you can mix and match to make your own custom creation.

Broadway Cellars
Broadway Cellars‘ claim to brunch fame is its unlimited mimosas offered with brunch. Of course, you’ll need some food to soak up all that champagne, and the food does the trick and is delicious to boot. Brunch entrees include classics like French toast, quiche and corned beef hash, plus more hearty fare like burgers, salads, and sandwiches.

Deleece
Deleece is another member of the “all you can drink” club, offering bottomless mimosas with Sunday brunch. The kitchen churns out both brunch stables like eggs and waffles and more creative dishes. The lobster Benedict with arugula and truffle hollandaise is a winner as are the breakfast burritos.

Angelina Ristorante
Angelina was the first to offer bottomless mimosas and bloody mary’s (you can also choose bellinis or straight champagne) and it still does it the best. This is not the place to come if you are nursing a headache or hangover. The vibe is much more “keep the party going” than it is “recover from the night before”. Loud music pumps from the speakers, the crowd screams above it, and the waitstaff have been known to put on impromptu dance performances for the crowd. The menu is limited but offers tasty dishes with an Italian twist. Think pasta with prosciutto and chicken, or frittatas with sundried tomato and mozzarella.

M.Henry
M. Henry focuses on creative New American cuisine using organic, locally-sourced ingredients. The line can be insane on Sundays after noon, so come early or come prepared to wait. Luckily, the storefront houses a cafe where you can have a nibble and a cup of coffee while you wait for a table. Entrees include unique offerings like black bean cakes with eggs, banana rumba french toast, and peasant quiche.

Nookie’s Too
Nookie’s Too doesn’t do fancy brunch. Offerings are more basic – omelets, pancakes, waffles – but still well-prepared and served in generous portions. On summer days, go early to score a seat on the sidewalk cafe so you can enjoy the sun and some people watching. Nookies is BYOB, so bring your own champagne and enjoy a few mimosas. If you forget, Kafka wine shop is right across the street.