Blues and Jazz Clubs in Chicago 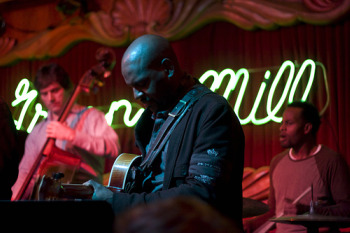 Blues and jazz have long been a part of the musical landscape in Chicago and even today, blues and jazz clubs are among the most popular in the city. If you’re looking for a place to hear some live music, check out one of these blues or jazz venues.

Buddy Guy’s Legends
The legendary Buddy’s Guys is bit of a tourist trap, but it’s also a spot to hear some of the best blue in Chicago. National and regional acts prevail, though sometimes Buddy himself, or even special surprise guests (like John Mayor) have been known to stop by. Cover is $10 during the week and $15 on weekends.

House of Blues
Though the House of Blues often play hosts to big name national acts of the rock and hip-hop persuasion,  The Back Porch hosts live blues nightly on its stage and usually only costs about $12.

Kingston Mines
Lincoln Park’s Kingston Mines hosts two stages blues every night. Cover is about $12 during the week and $15 on weekends. Come early or be prepared to wait on Friday and Saturday nights though, especially when bigger name acts are performing. If you’re like a more low key experience, come during the week.

Rosa’s Lounge
For blues on a smaller budget, head to Rosa’s  Lounge, where weekday shows cost just $5, and the bigger names on the weekend are only $10.

Green Mill
Jazz is serious business at the Green Mill. It’s a Chicago institution that’s been around since  the 1920’s and seen the likes of Frank Sinatra and Al Capone in it’s booths. There’s a a hefty cover charge ($12) unless you come after 2am, and if you talk during the performance you will be “shushed” by your fellow patrons. But, if you are a true jazz lover, there’s no batter place in the city to hear it.

Andy’s Jazz Club
Andy’s is a little more low-key than Green Mill, a little less known among the tourists, and little more “divey.” Cover is $10 and they offer a full menu, so you can eat while you enjoy the show.