Breweries and Brewpubs in Chicago 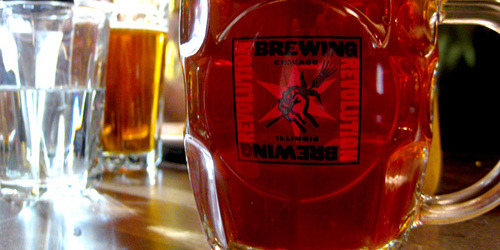 The city of Chicago may have been slow to the micro-brew game, but she’s certainly catching up.

Chicago now has five breweries/brewpubs operating in the city limits…well, six if you count chain Rock Bottom (which offers a great rooftop bar in the summer). Here’s the skinny on the beer and bar grub served at each.

Chicago’s original brewery, Goose Island operates two locations in the city. The first to open up (in 1998) was the North and Clybourn location. Over 20 varieties of beer are produced here, including the breweries signature drafts like Honker’s Ale and 312, plus more unique brews such as the Night Stalker Stout and Standard Ordinary Bitter. The brewery also hosts guest taps of nearby breweries including the Lost Abbey, Half Acre and Great Lakes.

The Wrigleyville location is equally well-stocked with delicious beers, though on days when the Cubs play it can be a bit of a madhouse. Both locations have full kitchens that turn out hearty pub fare like nachos, burgers and heaping salads. Both locations open at 11am daily and offer beer to-go.

The newest spot on the brewery scene in Chicago is Revolution Brewing, which opened in February of 2010 to rave reviews. The brewer is an alum of Goose Island and plans on brewing 25 different styles each year, including lagers, ales, Belgian wits, IPAs, and stouts. The menu is elevated a step above pub food and features mouth-watering creations like bacon fat popcorn with bacon, crispy sage and parmesan; mussels with hard cider and bleu cheese; burgers, salads, and pizzas; and entrees like pork chops with sage stuffing.

The story of Half Acre Beer is the story of passionate people doing what they love, and finding success. In 2006 a few friends decided to open a brewery and now their beers, like Daisy Cutter Pale Ale, Half Acre Over Ale, and Big Hugs Imperial Stout, are available at Chicago’s best bars and beer stores. There’s no onsite bar or restaurant, but the brewery does hold the occasional tour or special event.

Metropolitan Brewing doesn’t have a pub, or a restaurant, or even a phone number. What it does have are delicious beers, like kolschs, lagers, and alt-styles, available at bars and stores in the Chicago area. Though you can’t come sit and sip here like you can at some of the other breweries, you can come see how a small brewery operates. Metropolitan offers brewery tours Saturdays at 1pm and 3pm.