Breweries and Brewpubs in Detroit 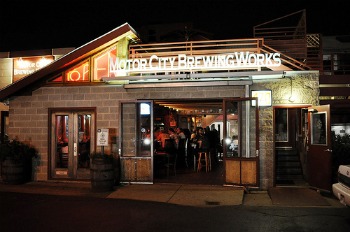 The craft beer movement is gaining steam in Detroit, but hasn’t quite taken off yet like it has in other major cities. At most bars, you’ll find little selection outside the majors – Budweiser, Miller, Coors – and their many subsidiaries like  Becks, Labatt, Molsen, Stella Artois, Michelob, etc. In some bars, the best you can hope for is a Fat Tire or Blue Moon as your “craft beer” option. But that is slowly changing, with more restaurants and bars offering a wider variety of local and international craft beers. Here are some of the best spots in Detroit and the surrounding suburbs to enjoy your favorite beers.

Detroit Beer Company
Detroit Beer Company offers eight beers at a time, all brewed in house, including varieties like the People Mover Porter, Detroit Red, and Steam Tunnel Stout. They have a full menu that includes a creamy, cheesy beer cheese soup, hearty pastas, big burgers, brick over pizzas and my fave, the muenster chicken served on cheesy spaetzle.

Woodward Avenue Brewers
Woodward Avenue Brewers is located slightly out of Detroit, a few miles up Woodward in Ferndale, and offers its own beers brewed onsite, plus a full bar stocked with beer, wine and liquors from around the world. The WAB, as it’s called, serves basic bar food like chips and salsa, flatbread pizzas, salads and burgers. all food is half off Mondays after 4pm.

Dragonmead
Dragonmead is a brewpub for those who like choice, and a lot of of it. The brewery offers a rotating selection of its own award-winning beers, like Corktown Red, Honey Porter, Oatmeal Stout and Honey Brown, with dozens to choose from each week. They also served food – as what seems like an afterthought – but the real star here is the beer. The only complaint among many patrons is the early closing hours; they shut their doors by midnight on weekends. 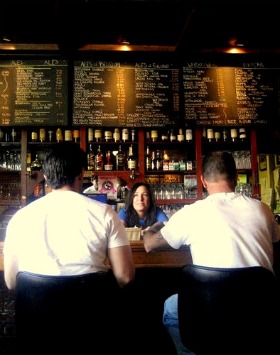 Shores Inn
St. Clair Shores’ best gathering spot for beer drinkers, sports fans, and families alike, Shores Inn offers a surprisingly deep beer selection.  With 20 or so beers on tap and over 180 beers in bottles from around the world, beer lovers could return every day for a week and not try the same thing twice. They also have an extensive food menu, which ranges from traditional pub grub like nachos and chicken fingers to entrees like giant burgers, heaping plates of pasta and crispy fried fresh lake perch.

Roast
Michael Symon’s newcomer, Roast, is laready making a name for itself for the delicious food and bargain happy hour specials. But the great beer list shouldn’t be neglected either. Many of the beers offered are from Michigan – such as Leelanau Brewing Co. , Jolly Pumpkin, North Peak, and Bell’s – while others are Belgians and craft beers from around the country.

Slow’s BarBQ
Slow’s burst onto the scene a few years ago and quickly earned accolades for bringing some of the country’s best barbecue to Detroit. People still wait for hours to sample the delicious pulled pork and sinfully rich cheesy waffle fries. And while they wait, they can enjoy one of the best beer lists in the city. Brewers from Grand Rapids,  Detroit, Ann Arbor, Kalamazoo, St. John’s and Bellaire, Michigan are all represented along with national and international craft brewers.

Ye Olde Tap Room
When food comes second to a night out with good beers, head to the Tap Room, a dive bar located at the border of Detroit and Grosse Pointe and has been open since 1912. With the slogan, “over 250 Beers, 24 Single Malt Scotch, one drunken bartender,” you can tell what kind of night to expect here. Decor is basic – banged up wooden benches sit on unfinished concrete floors, but the atmosphere is lively and the beer selection second to none.