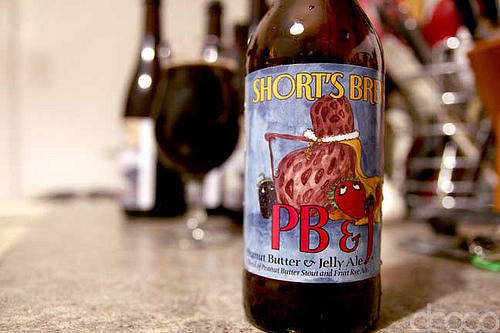 Traverse City has long been a summer beach getaway for families in Michigan, but many Chicagoans haven’t yet realized that not only is a great escape from the city as well (just a five hour drive) but it also has a lot more to offer than sand beaches and family fun. The area is quietly becoming a culinary hotspot (Mario Batali even makes it his summer home) with excellent restaurants that use fresh local ingredients, and wineries that have progressed far beyond the overly sweet wines generally associated with Michigan.

And for beer connoisseurs, there’s even more to love. The Traverse City area is home to five of the state’s best brewers. Here are the breweries not to miss in Traverse City.

If you like slightly off-kilter beers that swing as far away from Budweiser as you can get, head to Right Brain, a delightfully quirky pub in the city’s Warehouse District. The beer list is constantly changing, but expect an excellent range of porters, IPAs, stouts, sours and beers that defy category, like asparagus beer. Bar snacks like pretzels and hummus are available and the bar is stocked with board games to entertain you will you sample the various styles of beer.

Located about 30 minutes east of Traverse City in Bellaire, Short’s is well worth the detour. The pub serves an eclectic menu of food to complement the beers. Try the baked mac n’ cheese, the Voodoo Lady sandwich with pastrami, red onion, spinach, cheese and Pilsner mustard, or design your own pizza.  The beer selection changes often and includes everything from traditional ales and lagers to unique beers like Chocolate Wheat, Key Lime Ale,PB & J Stout and Pistachio Cream Ale.

Jolly Pumpkin offers more than just beer. This brewery, restaurant and distillery on the Mission Peninsula rotates their beer list often (expect a few award-winners) and also serves beers from their sister brewery, North Peak. Menu items include sandwiches, burgers, pizzas, and ribs, and beer is available to go in growlers and kegs. The restaurant also has a private event space.

North Peak sells its signature porters, IPAs, ambers, and stouts along with elevated versions of bar food like gorgonzola ale dip, beer steamed mussels, and pretzel crusted chicken. The space is airy and large, with a more intimate downstairs pub and a cozy outdoor patio during the summer.

Despite the name, Mackinaw Brewing is located in downtown Traverse City. Along with hearty pub grub like fish n’ chips, pastas, ribs and burgers, they serve a rotating selection of ales, lagers and stouts. To taste the local bounty of Traverse City, try the Cherry Heritage Lager, made with local fruit.

If hard cider is more to your liking, hightail it to Leftfoot Charley in the Traverse City Commons, where in addition to wine, you can sample original, ginger, and cinnamon hard ciders in a bright, open space that was formerly part of the Northern Michigan Asylum.