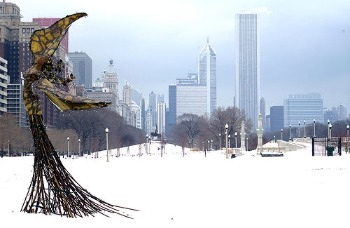 Winter is generally unpleasant in most northern cities, and in Chicago it’s no exception. Winter sees the worst weather and the fewest tourists, but for those who do come at the coldest time of year, winter in Chicago also means lower prices.The city hosts dozens of festivals and events to keep residents busy (and their minds of the cold perhaps) including free museum days, many of which are clustered in January and February. Hotel also offer lower prices in winter, in an effort to sell more rooms when there are less tourists visiting the city. Of course, for the trade-off of lower prices, you’ll also suffer through much lower temperatures.

The average highs in January and February range from 32-38°F with lows of 18-24°F, but a cold snap with a week of days with temps below 0°F is not unusual, and the “wind chill factor” can often make the air feel a lot colder than it really is.

>> more on weather in Chicago

Surviving the Chicago winter is all about being prepared. Luckily, you could easily arrange to spend minimal time outside, going from warm building to bus, train or cab and then back to a warm building. But with so much to see and do outside, you’re probably going to want to spend some time outdoors, and you’ll need to be bundled up. With the right gear, the temperatures can be quite manageable, but if you come dressed for “winter” in the south, you’ll end up miserably cold.

>> more on what to wear in Chicago in winter

Another good aspect of visiting Chicago in winter is that, thankfully, there’s lots to do. Most residents probably wouldn’t put up with the winters otherwise (though the beauty of the summers here is a nice reward). Winter is a great time to explore the city’s many museums, take a cooking class, learn about the city on a historical tour or sightseeing bus tour, see a play or opera, or even spend some time outdoors with free ice-skating in Millennium Park, and free festivals like Zoo Lights and the Christkindlmarkt in December.

>> more things to do in Chicago in winter

Winter can also be a festive time thanks to several holidays. Though it’s cold, many people choose to come to Chicago to see the beautiful Christmas displays and do their holiday shopping, to toast to the new year at a downtown restaurant, to enjoy a romantic evening for Valentine’s Day, or to party it up and watch the parade for St. Patrick’s Day.

>> more on holidays and events in Chicago