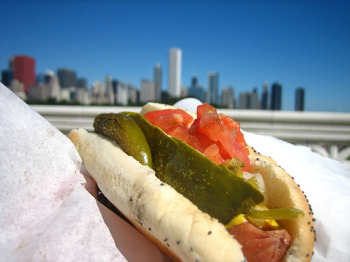 When people think of traditional Chicago foods, two things come to mind: deep-dish pizza and Chicago-style hot dogs. There are lots of stories circulating as to how and when the Chicago dog as we know it came to be, but we do know that Vienna Beef franks (the most common brand used today) were first served in Chicago at the end of the 1800’s. The company’s headquarters are still located in Chicago

So what makes a Chicago dog so special? The main thing is the sausage. Vienna beefs are the most common and popular, as attested by the many signs around the city’s hot dog stands that proudly proclaim that only Vienna beefs are used in their hot dogs. The franks are almost always boiled and have a “snap” when you bite into them.

Served in a poppyseed bun and “dragged through the garden,” they are covered in mustard, onion, tomato, relish, cucumber, celery salt, and a pickle spear. One common hot dog ingredient never used on a Chicago-style dog: ketchup. If you love it, go ahead and ask for it, but be prepared to endure a few lectures from die-hard hot dog aficionados who will tell you that topping your dog with ketchup equates to sandwich sacrilege.

There are over 1800 hot dog stands and restaurants in Chicago, but the top spots are considered to be Portillo’s, Gene and Jude’s, Superdawg and the Wiener’s Circle. While Portillo’s has an extensive menu featuring other items like ribs and burgers, Gene and Jude’s is a true hot dog counter than doesn’t even have seats…or ketchup (so if you love it, bring your own). Superdawg is known for the giant hot dog figures adorning the roof, and the Wiener’s Circle is known for the sassy attitude you’ll get from the staff, especially late at night once the post-bar crowd comes out. So which one of those is the best? That’s an argument that could last for years…and probably has.

In a class by itself, you’ll find Hot Doug’s. Doug’s is only open from 10:30am to 4pm Monday through Saturday and there is nearly always a line. Doug’s does serve a Chicago-style dog, but what people really come for are the specialty sausages topped with premium ingredients. Among the usual offerings are wild boar with pesto, smoked crayfish and pork with goat cheese, and foie gras sausage with truffle aioli.