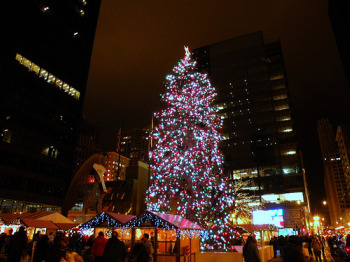 Though the temperatures are dropping, December in Chicago is a festive time. The Chicago Christkindlmarkt, the largest German Christmas market outside of Germany, opens in Daley Plaza on the day before Thanksgiving and runs through Christmas Eve. The market is free to the public and features a whole smorgasbord of traditional German fare like giant soft pretzels, bratwursts, schnitzel, potato pancakes, marzipan and gingerbread. Warming tents serve German beer and a hot mulled wine called Gluwein, and vendors sell German crafts, candies, and holiday treats like ornaments, beer steins, candles, lace and toys. The Chicago Christkindlmarkt website lists the hours and vendors for each year’s market.

The centerpiece of the market is the Daley Plaza Christmas tree, which is ceremonially lit by the Mayor as a childrens choir sings holiday carols. The lighting of the 90-foot tall tree takes place every year on the day before Thanksgiving.

Daley Plaza isn’t the only place where you can experience the holiday spirit around the city. One can’t help but feel like decking the halls after a stroll down Michigan Avenue or State Street. Amidst the hustle and bustle of shoppers, you can peer into the windows at Macy’s to see displays of toys and lights so elaborate that even Santa himself might be jealous. The sound of holiday carols fills the streets and not even the cold temperatures and crowds can seem to dampen the spirits of the busy shoppers.

Visitors who ride the city’s public transportation, the el train, should be on the lookout for a special holiday sight. Every year, the Chicago Transit Authority (CTA) designates one train as a Holiday Train, and covers it in thousands of dazzling lights. Inside, the train is decorated in bows, presents, and candy canes, and the first train has been replaced with an open-air flatcar on which you can spot Santa and his reindeer. Information on the Holiday Train’s hours and routes is posted on the CTA website.

And speaking of dining and drinking on Christmas Eve and Christmas Day, while many of the best neighborhood establishments close done (with the exception of a few Chinese restaurants), more tourist-friendly places downtown stay open. Hotel bars and restaurants, like NoMi at the Park Hyatt, Mercat at la Planxa at the Blackstone, State and Lake in the Wit, Seasons at the Four Seasons, and C-House at the Affinia are all good bets.