Dining Around the World in Chicago: The Best Restaurants for Foreign Cuisine 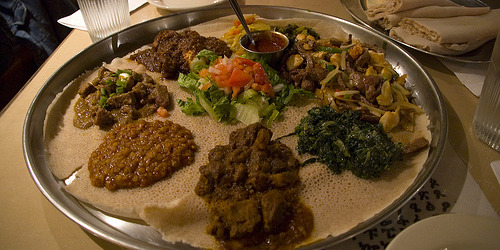 One of the best aspects of the Chicago dining scene – aside from BYOB restaurants and all the phenomenal chefs the city is home to – is the abundance of international options available at every price point, from dirt cheap to splurge-worthy.

From Argentine to Zimbabwean (okay, maybe not Zimbabwean), Chicago seems to have a restaurant serving the cuisine of nearly every country on earth. Here are a few of my favorite places for international eats.

There are a handful of Ethiopian restaurants in Chicago’s Edgewater neighborhood. One of the best is Ras Dashen, a cozy little place with excellent service and reasonable prices. Single entrees range from $11-18, making the best deal the “omnivore dinner for two” which can actually feed three and offers three entrees and three sides. The doro wat – chicken in a spicy berbere sauce – and shimbera asa wat – fried chickpea balls in a spicy sauce – are highly recommended, along with a bottle of sweet, cold honey wine to calm the heat.

The secret is definitely out about Tango Sur. This Argentine steakhouse on Southport (3763 N Southport Avenue) just south of Addison serves up gigantic portions of tender, juicy steak at very reasonable prices. The restaurant is cozy and candle lit, service is professional and attentive, and it’s BYOB. Couples who split the filet (two very large filets, served with spinach mashed potatoes) and a few appetizers like empanadas or gooey provoleta cheese, can expect to spend under $60 for dinner. Tango Sur only takes reservations for large parties, some come early or expect to wait – there is a back room where you can crack open a bottle while you wait for a table, or the host will take your number and call when a table is ready. 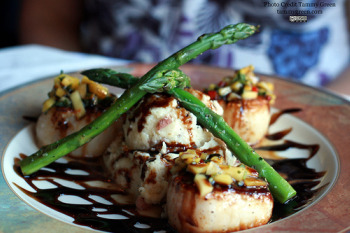 Chicago is home to a large Latino population, and you’ll find great Mexican food in several forms. Head south of the Loop to BYOB Nuevo Leon in Pilsen (a traditionally Latino area that is now home to more lofts and art galleries) for inexpensive options like fajitas, pollo en mole, and chilli relleno. Rique’s, farther north in Uptown, is also BYOB and serves specialties like chicken tinga and queso fundio with chorizo at low prices.

For a new spin on Mexican favorites, try BYOB Mixteco (1601 West Montrose) in Lakeview. The lamb chops in mole, pork sopas, and tamales are all fantastic. At northern neighbor Dorado (2301 West Foster), Mexican favorites are given a French twist. Look for fish in a spicy buerre blanc and the signature duck nachos.

Chicago is home to two great Cuban restaurants. 90 Miles Cuban Cafe offers heaping sandwiches and hearty plates of Cuban specialties for under $10 and is BYOB. Cafe 28, in Lincoln Square, creates dishes with a mix of Spanish, Mexican and Cuban influences. The ropa vieja, empanadas, and sangria are excellent, but many rave even more about the brunch offerings like huevos a la Cubano and green tamales and eggs.

There’s nearly always a line for a table at Toro Sushi, and with good reason. The seafood is super fresh, chef Mitch is super friendly (though the table service can be a bit slow) and the rolls are super delicious. Stick with basic sashimi or get crazy with some of Mitch’s off-the-wall rolls. Either way, you can expect to spend about $30 for an amazing sushi dinner for two at this Lakeview BYOB spot. 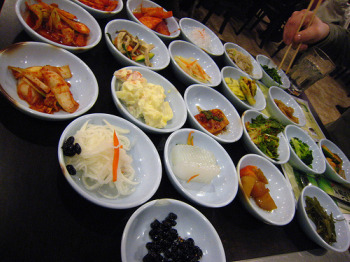 The undisputed champ of Koren restaurants in Chicago is San Soo Gab San (5251 Western), a deceptively large restaurant offering traditional Korean barbecue. Service comes off as a bit harried and uncaring, but the food more than makes up for it. Diners select their choice of meats, like pork, chicken, beef and octopus with various marinades, and then grill it to their liking at the table. Along with the meats, guests also receive about a dozen different sides to enjoy with it. It’s a communal dining experience that is a lot fun, inexpensive, and of course, delicious.

There’s a very large Greek population in Chicago (as the presence of Greektown in the West Loop will attest) and no shortage of options. Greek Islands is listed as favorite by many, but I prefer Athena for happy hour ($5 menu on weekdays plus a great summer rooftop patio) and Pegasus for dinner. Of all the Greektown faves, Pegasus seems to offer the most reasonable prices, best service, and the best pastitsio – a huge heaping portion that easily feeds two people for under $13.

Lakeview’s Istanbul Restaurant takes top honors for best Turkish food in Chicago. Add in the BYOB factor and reasonable prices, and it’s a clear winner. Appetizers like hummus, falafel and baba ganush are all great, but the kebabs are even better. Try the yogurt kebab – succulent, tender pieces of filet topped with a creamy yogurt sauce – and the kasarli pide, the Turkish version of a calzone stuffed with melted, gooey cheese. Istanbul is BYOB and most entrees are under $15.

Resi’s Bierstube Restaurant and Bar (2034 West Irving Park) in North Center will take you right back to the motherland…or at least back to high school German class. With a steady crop of regulars from the local German enclave, you know this is the real deal. The menu is limited  – featuring mostly sausages, various types of schnitzel, and potato pancakes – but what they do they do well. On summer days, the beer garden is glorious, as is the extensive selection of German beers. 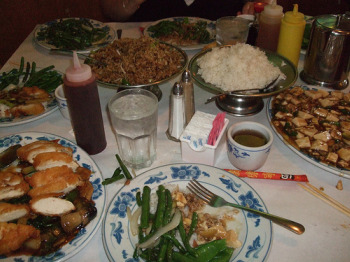 Craving a perfectly crackly-skinned Peking duck? Look no further than Sun-Wah Bar-B-Que in Uptown. For $32, you’ll receive the aforementioned duck, prepared and then expertly carved tableside. Along with succulent chunks of duck, you’ll get a plate full of bao buns to make mini sandwiches, followed by a heaping bowl of duck soup, and a generous portion of duck rice or duck with duck-fat-fried noodles. Most other traditional entrees are in the $6-10 range and Sun-Wah is BYOB, making this a very inexpensive night out.

If dim sum is more to your liking, head down to Chinatown and pay a visit to Won Kow (2237 Wentworth). The oldest restaurant in Chinatown, it’s been around since 1927 and still sees a crowd of regulars, tourists, and Chicagoans looking for quality, inexpensive dim sum. The drinks are strong and cheap, but be warned, they only offer cart service for the dim sum on weekends.

Mon Ami Gabi is a chain (with locations in Las Vegas, among other cities), but it’s one that’s done so well you’d never guess. Located on the first floor of Lincoln Park’s swanky Belden-Stratford Hotel, it’s perfectly cozy and inviting, with a small bar, elegant patio, and intimate back room. Like the decor, the dishes are right out of a French bistro – reasonably priced escargot, French onion soup, and beef filet in merlot butter with pommes frites.

If crepes are all you need to know about French food, check out Icosium Kafe in Andersonville. With about 20 varieties of sweet and savory crepes ranging from $5-10 (including soup with the savory crepes), this BYOB cafe can fill you up and satisfy your sweet tooth for a small price.

Located in Wrigleyville, BYOB Moroccan restaurant Andalous is a pleasant surprise. The dining room is tiny, but opens to a charming back patio on warm days. Entrees include traditional tagines of lamb, chicken and couscous, plus the savory pastilla – a puff pastry stuffed with chicken and Moroccan spices.

Nearby in Lakeview, Casbah (315 North Broadway) offers another twist on Moroccan food – this time with elements of Lebanese and Algerian cuisine. Try the chicken with artichokes in a creamy sauce, and save room for the signature desserts, knafe – a cheesecake baked on shredded wheat and topped with honey and pistachio nuts. One bite and baklava will be a faint memory. The service is pleasant but slow (one man runs the whole dining room) so bring a bottle or two and prepare to linger.