Dining on a Budget in Chicago 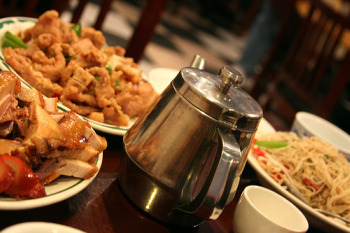 Eating cheaply in Chicago is easy. While the city has more than it’s share of pricey places to indulge on creatively crafted multi-course tasting menus and delightful delicacies from around the world, it has also perfected the art of delicious, yet affordable food for the masses.

Go BYOB
Many Chicago restaurants allow you to BYOB (bring your own beer, wine or liquor) to consume with your meal. This can be a huge money-saver, considering that many restaurants mark their booze up by as much as 300%. (Add in Chicago’s high tax rate of just over 10% and booze can really take a bite out of your budget). If you plan on drinking with your meal, choose a BYOB and you’ll save anywhere from $30 to $100 per night.

Eat Ethnic
Chicago is a melting-pot city with pockets of Greek, Indian, Thai, Vietnamese, Chinese, Mexican, Korean, Italian, Irish, and German neighborhoods, which are all home to restaurants serving up that country’s cuisine. Not only are many of the city’s ethnic restaurants BYOB, many also offer delicious meals at very low prices. At Sun-Wah, for instance, you can get a whole Peking duck, served in three courses (that can easily feed four people), for under $30. Tac-Quick serves up traditional (ask for the not-so “secret” Thai menu) and Americanized versions of Thai dishes for around $8 per plate. And at Rique’s Regional Mexican restaurant, you’ll have to work hard to spend more than $10 per person for a heaping plate of south-of-the border specialties.

Get Out of Downtown
As in any big city, the further away from the major tourist sights you get, the lower the average price, and the better the quality. Restaurants on the Magnificent Mile and in the Gold Coast tend to fall into two categories: cheap and mediocre (tourist joints) and high-quality but expensive. Head further away to the neighborhoods where more locals can afford to live and you’ll find food that is both delicious and reasonably priced. You’ll also find that many neighborhood places have great weekly food and drink specials.

Share and Save
This certainly isn’t true across the board, but at some restaurants (think steakhouses, ethnic restaurants, pubs, and pizza parlors) the portions can be quite big. If you are traveling with a companion, save a little money by sharing an entree or an appetizer. You’ll find that you’ll still have plenty to eat but you’ll save some cash.

Go for Lunch or Sit at the Bar
Several of Chicago’s most acclaimed restaurants are also open for lunch. Come during the day and you can sample many of the same dishes as those offered during dinner, but for less cost. For dinner or lunch, you can also opt to sit at the bar. It’s a good way to get in a hotspot at the last minute without a reservation, and since you aren’t taking up a table, there’s less pressure to indulge in a full meal. Instead, you can have a drink or two and just sample a few small plates from the bar menu. Again, you’re getting all the taste and quality that the chef is known for, with less cost.