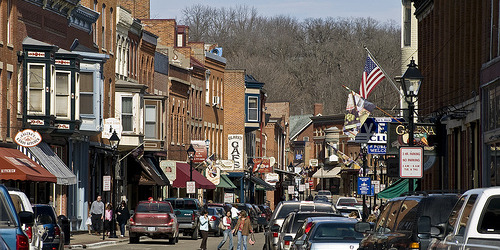 Like most major American cities, Chicago is one that can be “done” in just a few days. In three days, you’ll never see and do everything you could, but you can get a good taste of what the city is all about. If you’re coming from a nearby city and were able to take advantage of some cheap tickets to Chicago, there’s no shame in just popping over for a long weekend. But if you’re able to spend more time in the region, it makes sense to make the most of it, and while you could spend all that extra time exploring the lesser-known sights or getting familiar with the city’s neighborhoods, why not venture further out and take a few nearby day and overnight trips as well? Here are a few ideas for Chicago-area places to visit outside the city limits.

The ‘Burbs: Oak Park, Naperville, Skokie, Elmhurst or Evanston
A fair chunk of the greater Chicago area’s population lives outside of the city proper. To see another side and experience life in the suburbs of Chicago, hop on the Metra and take a ride out to Oak Park (home of the Frank Lloyd Wright House and Studio), Evanston (a posh ‘burb located along the Lake), Naperville, Skokie or Elmhurst. There are many cheap Chicago hotels in this area as well, so you can stay overnight and save a bit of your budget.  Each suburb has a small, walkable downtown area that is home to enough shops and restaurants to keep you busy for an afternoon. Skokie and Evanston are accessible via the el, while the Metra will get you to Naperville, Elmhurst, or Oak Park in under 30 minutes.

Lake Geneva
90 miles north of Chicago, the town of Lake Geneva (which sits on the shores of the Lake of the same name) was once a country retreat for Chicago’s most wealthy citizens. Nowadays, the Midwest’s elite share the town with visitors who come to enjoy it’s old-timey charms, family-run restaurants, chic boutiques, and beautiful Lake. The drive from Chicago to Lake Geneva takes about an hour and half, though if you are visiting without a car, you can still get close to the town via the Metra. From the Harvard station you’ll then either need to arrange for a taxi, or stay at the sprawling Abbey Resort, which will send a free shuttle to pick you up.

Wine Country
Illinois is home to over 80 wineries, most located within a two hour drive from the city (alternatively, Harbor Country in Michigan is also home to several wineries). The Illinois Wine website offers suggested routes by region, and links to each area’s wineries for hours, directions and information.

Galena
Galena is one of several Midwest small towns that make for a perfect weekend getaway from the region’s big cities. The town is a bit further from Chicago. It takes about three hours drive to Galena, which is located just over the Mississippi River from Iowa. Over 80% of the downtown’s buildings are listed on the National Register of Historic Places. In town, you can visit the oldest hotel in Illinois or sample wine from one of the local wineries.

Milwaukee
Just two hours north of Chicago, Milwaukee is another Midwest big city worth visiting. Getting from Milwaukee to Chicago is easy, thanks to cheap bus and train service that runs regularly and usually costs under $20 round-trip per person. Go for a night, or even just for an afternoon of shopping, relaxing on the Lake, or sampling beer at one of the city’s many breweries.

Starved Rock
Located about 75 miles southwest of Chicago, Starved Rock State Park features 13 miles of hiking trails and dozens of scenic canyons and waterfalls. Visitors can camp in the park, stay at a luxury lodge, or bunk at a nearby hotel and drive into the park each day.

Harbor Country
About an hour and a half by car from Chicago, Michigan’s Harbor Country sits just across Lake Michigan and is home to several small lakefront towns like Saugatuk, Benton Harbor and St. Joseph. During winter, they empty out (many shops and restaurants even shut down for the season) but during the warmer months, they come alive as families play on the beaches and wander the neighborhood streets. The sunsets here are particularly beautiful, and the area is popular with couples celebrating a romantic weekend.