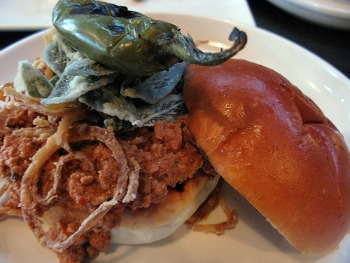 Situated in an unassuming square grey building on the quiet corner of Kedzie and Schubert (just across from the Blue Line stop) in Logan Square, Longman & Eagle doesn’t look like much at first glance. Even upon walking in, I found myself wondering how such modest place had garnered such buzz, even earning a coveted Michelin star. It didn’t take me long to find out the answer.

On a lazy Sunday afternoon, I claimed a seat at the bar. Since it was 3pm, there was a break in the service (and crowd) as brunch changed to dinner. Rather than order from the limited bar menu, I chose to have a few drinks and wait until 5pm to order.  Longman & Eagle offers not only an extensive and well-curated beer and wine list, they also offer several handcrafted cocktails from a menu that changes seasonally. Bartenders were fast, friendly, and always available, even as the evening wore on and the space became increasingly crowded.

I started with the kobe meatballs with creamy polenta, a perfect small portion that whet my appetite for more. The meatballs were moist and flavorful and the creamy polenta lived up to its name with a rich mouthfeel. I thenmoved on to the three seared Maine scallops with braised oxtail and black truffle gnocchi -a decadent small dish worth far more than its $12 price tag. The scallops were perfectly seared and the oxtail melted in my mouth. For dessert, I sampled the gruyere donuts, three dense, chewy pastries filled with cheese, drizzled with maple syrup and served with citrus goat cheese – a unusually light and delicious end to the meal. Each dish was artfully constructed from locally produced ingredients for a medley of flavors that blended well. Portion sizes were substantial but not overwhelming and the prices were very reasonable, with apps coming in at $4-9, small plates and sandwiches ranging from $8-$15 and entrees averaging $20.

Longman & Eagle is open 7 days a week. Brunch is served until 3pm, dinner begins at 5pm. They do not take reservations and waits can be hours long, so come early (or later on a weekday) or be prepared to wait. Longman & Eagle has also recently opened a 6-room inn above the restaurant. Basic rates range from $75-$225.