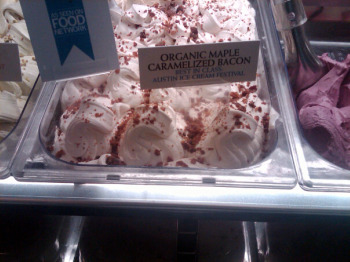 Located in Chicago’s bustling Lakeview neighborhood (at Melrose and Broadway), Paciugo is a newcomer to the city’s already full ice-cream and gelato scene. But, it’s quickly become one of the best spots to cool down with some creamy gelato on a hot summer’s day. The interior looks like your average ice-cream show: a banquette along one wall, tables for two and four scattered around the room, white walls decorated with artwork from local artists for sale, and a long gelato cooler taking up the back wall.

Like most gelato shops, the staff here will gladly offer a taste or two, or three, or four, or even more if you ask nicely and toss a tip their way. They’ll serve up taste after taste until you find one you love, though chances are it won’t take very long. Paciugo rotates from a selection of over 100 types of gelato and usually carries about two dozen at a time. There are milk-based, water-based, soy-based and no-sugar added varieties. One day they might have lavender vanilla, caramel sea salt, black sesame and durian fruit. Another time it might be Guinness Irish Stout, coffee, creme brulee, baked white peach, or lemon sage.

Every flavor is delicious in its own way, but if you ever arrive to find that maple-bacon gelato is available, order it. You won’t be sorry. Winner of “best in class” at the Austin Ice Cream Festival, and profiled on the Food Network, the treat is composed of gelato made with Grade B organic maple syrup and a bit of salt. The bacon is cooked crisp and the caramelized with maple and sugar until it takes on less of a “greasy breakfast” taste and texture of more of a “bacon candy” taste. It’s cold and creamy, salty and sweet, perfectly balanced, a little unconventional, and totally delicious.

Paciugo is a chain (based in Dallas) but one with a philosophy I can get behind. Their motto is s “Ante Lucrum Nomen” which stands for “Reputation Before Profit” and they’re clearly committed to putting out high quality, inventive, and tasty gelato.