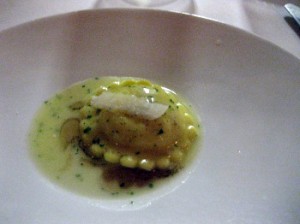 Getting a reservation at Schwa isn’t easy. The dining room seats only a handful of people, and generally it’s not sat to capacity, which means only a dozen or so people have the privilege of dining here each nice. You’ll generally have to call at least three or four times, leave a few increasingly desperate voicemails, and if the Schwa gods smile on you, you’ll finally score a reservation for 9pm on a Tuesday, four weeks from now.

Sounds snooty and pretentious, right? Luckily Schwa is the exact opposite. The food is playful and fun, the atmosphere is relaxed (expect anything from rap-rock to alternative to electronic music playing in the background), and the service is top-notch. Don’t expect to be served by a waiter though; here the food is delivered by the very chefs who’ve created it.

The menu changes seasonally but features those new classics of modern haute-cuisine:  gelees, foams, reductions, colorful sauces sprinkled in tiny drops around the plate, artful constructions that sometimes seem to defy gravity, and whimsical touches that elevate each dish to an art form. The 9 course meals includes fish, meat, and vegetable dishes plus a cheese course and dessert. It changes seasonally but has featured dishes like a cucumber and Hendrick’s gin gelee with pickled onions, a corn soup playfully topped with popcorn, jellyfish “pad Thai,” sauteed goat brains, tagliatelle with huckleberries and black truffle and veal heart, and caramelized sweatbreads served for dessert. It’s always unexpected, but always flawlessly executed.

But the very best dish served at Schwa isn’t even listed on the menu. It’s served as a sort of bonus course about halfway through the meal, and is quite possibly the single best bite I have ever put into my mouth. It’s the quail egg truffle ravioli – a single ravioli meant to be eaten in one bite. Upon putting it in your mouth, the first thing you taste is the heady, pungent truffle. Then the ravioli bursts and the creamy rich quail egg marries with the truffle sauce and parmesan to become a decadent mouthful that you’ll wish you could taste longer. All too soon it’s over, and you’re on to the next course.

Even if the ravioli weren’t worth the entire cost of dinner alone, a meal at Schwa would still come highly recommended as a delicious culinary adventure that won’t break the bank. While the price – a $110 per person – is on par with other set menus of its ilk, what makes Schwa a better value is that it’s BYOB. Bring a few of your favorite $20 or even $40 wines and you’ll still save a wad of green. Just start working on those reservations now.