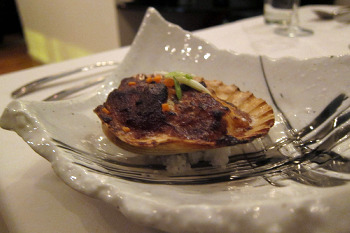 Chicago offers thousands of options for hungry visitors. The percentage of those restaurants offering high-quality, inventive food using fresh ingredients prepared in unusual ways is slightly less. Add the qualification of restaurants that are doing all that, and are BYOB, allowing diners to bring their own wine and save money, and you’re left with less than a handful. For these reasons and others, Bonsoiree stands out.

The restaurant is helmed by Chef Shin Thompson, who started it as an exclusive, and illegal, underground restaurant held in apartments all over the city. From there, it became a full-fledged restaurant, though a bit of the “secret society” feeling remains, thanks to the Saturday night underground menu. On Saturday nights, you’ll need to be a member of the restaurant’s underground mailing list to get in. It’s not hard to do so – just sign up on the website. Each month, a different “underground menu” is featured. It usually consists of 6-8 courses for around $85.

On no-menu Sundays, the menu is created each night based on what is fresh and available at the farmers market. If you’re prefer knowing what you’ll be having ahead of time, a visit Tuesday – Friday is recommended. The small, contemporary space only seats 28 diners (in summer that number expands thanks to a backyard patio) so reservations are a must any day of the week.

Chef Thompson’s menu combines French and Asian influences with a contemporary American menu served with a playful twist.  The menu changes seasonally, but 4/5 and 7/8 course options generally include a soup or salad (usually deconstructed, like a split pea and artichoke puree soup with pea shoots and candied walnuts), a fish course, a meat course (though vegetarian options are available), and dessert. Prices range depending on the menu; 4-5 courses are usually $50-$60 per person, and 7 or 8 course dinners hover around $85 each.

It’s not exactly cheap, but compared to other multi-course tasting menus of equal (or inferior) quality, it’s quite a deal. Especially when you consider that at other places, you’d be spending at least $40-$60 per bottle of wine. Here you can bring your own and save. Most people choose to bring 1-2 bottles for the 4-5 course meal and 2-3 bottles for the additional courses, depending on how many people are in the group. I recommend one sparkling, to drink with the first course and then save for dessert; one white, for the soup/salad or fish; and a red to complement the meat course.

If you can afford it, spring for the additional courses, so you can enjoy what is perhaps the very best dish the kitchen produces – the Scallop Motoyaki. Inspired by a traditional French dish called Coquilles St. Jacques, it is a scallop baked in a shell. The traditional version uses a  bechamel sauce and cheese; at Bonsoiree, it is prepared with a ponzu aioli instead of the bechamel, which is torched to the shell with Japanese chillies.  Rich, creamy, with just the right balance of savory flavor vs spice, it has been a fixture on the menu since Bonsoiree opened, and Chef Thompson has said that whenever he has taken it off to make room for new items, his customers have demanded its return.