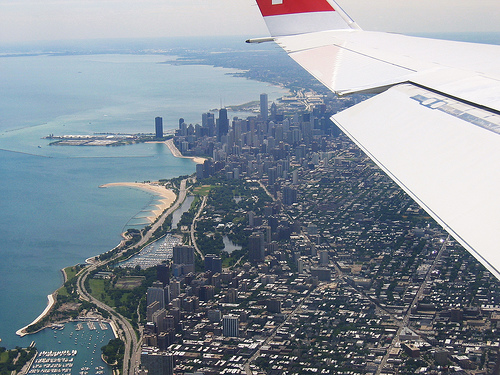 Living in Chicago is pretty sweet. We’ve got a gorgeous lakefront path where we can run and bike off the calories from all the delicious food we have in the city, it’s easy to get around via public transportation, we have 26 miles of shoreline within the city limits, and summers here – well, they’re just glorious.  If you can get over the political corruption and block out the memory of the cold Chicago winters, Chicago is pretty much perfect….especially if you like to leave it often. Chicago has two airports, including O’Hare, one of the busiest in the nation. It sends off thousands of flights every day, and all that competition among the airlines  means lower flights for travelers. It seems there’s always a great deal to be had when flying from Chicago…the trick is finding it before it disappears.

In order to make it easier for you to snag a great fare from Chicago, BootsnAll has launched a new tool call  GettingFrom.com. Just input the city you are flying from and you’ll be able to see the lowest airfares available. The list is updated every day,  meaning you’ll always find the most updated deals.

Recently we took a look at some of the best deals from airports all over the U.S. – including  Chicago – to check out the trends in air travel this summer. We wondered if prices really were rising like people say, and if that would mean that international flights would be just too expensive for most people to consider.  What we found surprised us.

>> Read more about what we found out about domestic vs. international travel from Chicago this summer

While international flights from Chicago were quite expensive this summer, there were some deals to be found still. New Orleans and Las Vegas are reachable for about $250 roundtrip this summer, but for just $200 more, you can fly  to Anchorage Alaska in July and August. $450 may not seem like a great deal, but when you consider the distance you’ll cover, it’s actually a very low price…especially when you consider that flights to Portland or Seattle – far less remote than Alaska – are just $50 less.

With the constant fluctuations in airfare, we think it’s pretty great that you can see a daily updated list of the cheapest destinations to fly to from Chicago, and we hope if can help you save some money as you see the world this summer.