Five Best Exhibits at the Museum of Science and Industry 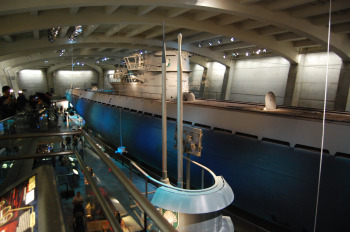 Chicago’s Museum of Science and Industry is one of the largest science museums in the world. The massive historical building is home to more than 35,000 artifacts and nearly 14 acres of hands-on exhibits. Visiting the museum can be a daunting experience – in such a large place, how do you know where to go and what to see? How can you make the most of a short visit?

While you could easily spend an entire day at the museum, stopping midday for a snack in the food court, a picnic on the expansive lawn or a bite at one of the great nearby restaurants, you can also see quite a bit of the highlights in just a a few hours. Here are the best exhibits not to miss at the Museum of Science and Industry.

As you descend in the wing of the museum that houses this actual U-505 sub, you see propaganda photos from the 1930’s and 40’s with slogans like “loose lips may sink ships.” This sub was captured in 1944. For many years, it was proudly displayed in front of the museum, but the harsh Chicago weather was beginning to destroy it, so it was moved indoors in 1997. The boat now rests in the center of the large room, surrounded by artifacts from the sub and hands-on exhibits that explain the technology used on board and what life was like for sailors.

A $15 tour of the boat is available for an additional $8 for adults and $6 for kids. Tours often sell out, so if you are set on taking the tour, be sure to come early in the day or buy tickets in advance. 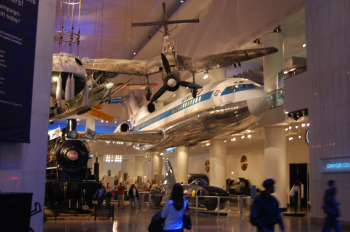 It’s (literally) impossible to miss the transportation gallery on the main level of the museum. As soon as you walk in, you’ll see the giant – and real – United 727 plane (which you can go inside) hanging from the ceiling, along with several other aircraft that date from 1917 to 1941. You’ll also see the Spirit of America, the car that drove over 530 miles per hour in 1965, and the Empire State Express 999, the first machine to break the 100 mph barrier.

On ground level, check out the Great Train Story exhibit, with 30 trains running on 1,400 feet of track, completing the winding journey between Chicago and Seattle. The trains pass through the Midwest, the Plains States, the Rockies and the Cascades, and their journey is interactive. You can help build a mountain tunnel, raise and lower a drawbridge, load lumber on a train car and sound a ships fog horn in the bay.

Both adults and kids will love the Science Storms exhibits. Kids get to push and pull various knobs to create their own storms, chase tornadoes in a virtual game, and watch as shifting plats create a tsunami waves. Adults will enjoy stepping into a wind tunnel, watching a tornado vortex, and seeing how a million tiny pieces of matter can combine to form one giant avalanche.

Avalanches, atoms, lightening, wine, fire, tsunamis, and sunlight are all explored and manipulated in various exhibits that showcase the natural world.

Long one of the museum’s most famous exhibits, the Coal Mine is part amusement part ride, part educational experience. The exhibit has been at the museum since 1933 and takes kids and adults on a train ride into the mines.  They’ll see the coal is and then emptied into a large hopper, called a “skip,” which brings the coal to the surface. In different work rooms of the mine, watch historic and modern mechanical methods of mining coal and see miners operate machinery like undercutting machines, drilling machines, and an automated coal loading machine.

The tour doesn’t require any additional tickets or fees, but it does close 30 minutes before the museum (the ride is 30 minutes long) so be sure to come early. 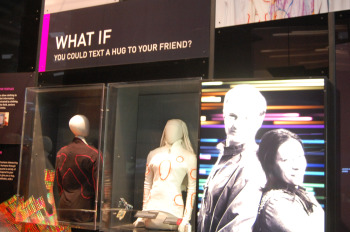 If you or your child have big ideas, you’ve got to see the Fast Forward exhibit, which examines the possibilities and “what if’s” of the future. What if we could build vertical farms that take up less land? What if people could live forever? What if you could text your friend a hug they could feel? What if there was no more hunger in the world?What if cars didn’t need gas?

The fast forward exhibit profiles people and projects that are actually working towards these goals, with big ideas and fascinating technology. Younger kids might not be as interested as the exhibits are less hands-on, but older kids and adults will learn a lot and be challenged to rethink they way they look at the world.