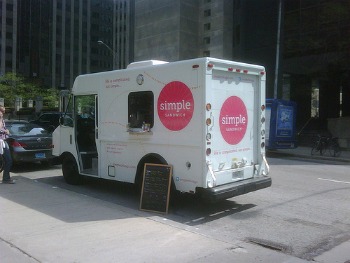 Portland and Austin have entire street corners and parking lots devoted to food carts. In Los Angeles, they roam the streets selling tacos and tamales. In New York and DC, you can always find a fresh soft pretzel or a ketchup-smothered hot dog. But in Chicago, food carts are a new, rare thing that faces an uphill battle against the city government.

Food carts in Chicago aren’t technically illegal, but the many rules and restrictions placed on them make it very hard to operate one or to get approved for a liscence.  According to the rules, food truck operators can not do any cooking, cutting, or food preparation of any kind on board (everything must be precooked and packaged in a licensed kitchen), can’t stay in one place for more than than two hours, and can’t sell anything after 10 PM.

Despite these restrictions, food trucks are suddenly all the rage in Chicago, with a handful of carts up and running, roaming about the city. Devotees have to follow their movements on twitter and hours are sporadic at best. But if you’re a food cart afficianado committed to tracking one down and sampling the traveling treats, you’ll be rewarded with some of Chicago’s tastiest new munchies.

Try Gaztro-Wagon (which began as a storefront north of Andersonville) and now serves signature “naan-wiches” from Dorthy the van. Try the Fidel Gaztro, which is filled with pork, ham, manchego cheese, pickles and mustard. Nosh on hearty meatball sandwiches from The Meatyballs Mobile, grab snacks and baguette sandwiches from Happy Bodega, or fill up on organic goodies from Simple Sandwich.

Desserts can be found on the go now too. Fritz Pastry offers homemade oatmeal cream pies (at their store Tuesday – Sunday or from the truck at lunchtime). And if cupcakes are your weakness, you can chase them around town at one of three trucks – The Sugar Whip, Flirty Cupcakes, or the More Mobile.

While these trucks have no set hours or location, your best best for finding one is downtown near the Loop, during lunch or when workers from the surrounding businesses are heading home.