Getting from Detroit to Chicago 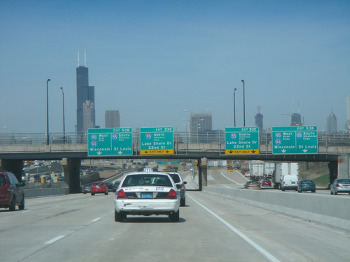 As two of the largest metropolitan areas in the midwest, the cities of Chicago and Detroit are well-connected by various forms of transportation. Because of the proximity of the two cities to one another, many people from the Detroit area do business or attend school in Chicago and the demand for cheap transport between the two cities seems to result in an abundance of options.

Flights
Delta, United, Southwest, American, Continental, and several other airlines offer frequent service from Detroit to Chicago. Prices are higher around holidays and special events, but if you book a few months in advance you can generally get cheap tickets to Chicago from Detroit.

Journey time: Around 45 minutes
Typical price: $80 to $150 round-trip per person

Trains
Amtrak connects Chicago to several other midwest cities, including Detroit. Tickets range from $60 to $120 per person, round-trip. The trains are comfortable and clean,with a stocked dining car and bar, and are very rarely full.

Journey time: About 6 hours, with several stops in Michigan enroute to Detroit.

Buses
While Greyhound does operate bus service between Chicago and Detroit, many people prefer to take the new low-cost bus service provided by Megabus. Megabus operates three to five buses each way every day. The buses are double-deckers and offer free wi-fi on board. The bus stops for a 30-minute break for food and stops in Ann Arbor and Detroit. The further in advance you buy the tickets, the cheaper they will be. The first few tickets sold on every bus are just $1 and go up from there. You can usually snag tickets for under $20 each way.

Driving
The drive between Chicago and Detroit is an easy one that takes place nearly all on the I-94 highway. The total mileage between the two cities is just under 300 miles.