Getting to Indianapolis from Chicago 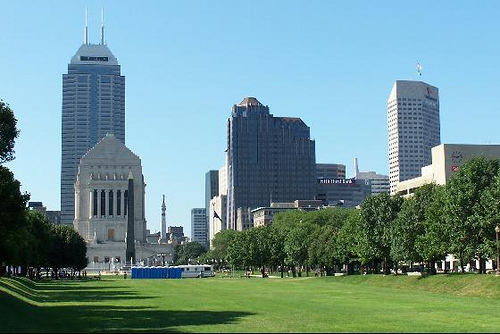 Chicago and Indianapolis are just about three hours away from each other by car. Flying will, of course be much quicker, with the flight taking under an hour, but it will be a much more costly option in most cases. The two cities are also well-connected by bus and train, with frequent service between the two.

Flights
US Airways, United, Southwest, American, Continental, and several other airlines offer frequent service from Indianapolis to Chicago. Booking further in advance can help you find cheap tickets to Indianapolis, though the cost is usually pretty low year-round, except for during holiday times.

Journey time: about 1 hour
Typical price: $120 to $200 round-trip per person. Southwest often has great deals for under $100 round trip.

Buses
Megabus makes the 3.5 hours drive between Indianapolis and Chicago several times per day.Tickets generally cost about $20-$30 each way, though thanks to frequent deals you can often find them for much less (often less than the cost of gas).

Driving
The drive between Chicago and Indianapolis is about 180 highway miles and passes through northwestern Indiana.

Journey time: 3-4 hours depending on traffic.