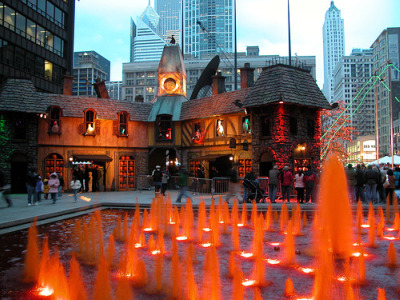 In Chicago, both the kids and the adults party hard at Halloween. There’s a bevy of activities for families to choose from, while adults don their scariest, sexiest, or silliest costumes for a night on the town.

Halloween lasts for much more than one day for kids in Chicago. In fact, the holiday spans nearly an entire month as October is chock full of spooky fun for families. Dubbed “Chicagoween”, the month-long festival features pumpkin patches and hayrides at locations around the city. For older kids, there are haunted houses and scary theaters. For the month of October, Daley Plaza becomes Franken Plaza, where a giant haunted house and orange fountains take center stage amidst activities like pumpkin decorating, story telling, scary movies, and circus performances. A Halloween Parade is held the Saturday before Halloween. The full line up of events is announced each September on the city of Chicago’s website.

Halloween is just another excuse for an all-night, blow-out party for adults in Chicago. Bars and clubs host costume contests with cash prizes for scariest, sexiest, and most original costume, and sightings of vampires, kittens and monsters are common along the streets and on the city’s public transportation. While most nightclubs will charge a cover for admission on Halloween, many more low-key bars and pubs will be free to enter and will offer cheap drink specials.

If dressing up in costume isn’t your thing, call it an early night on Halloween and then head out for breakfast in Lakeview or Bucktown the next day for prime viewing of “the morning after.” There’s nothing quite like seeing Spiderman without his mask or a she-vamp whose makeup has long since rubbed off, tottering home on the walk of shame the morning after Halloween.