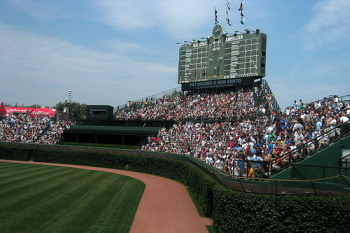 Visitors coming to Chicago to attend a Cubs game often want to stay close to the stadium, and if your main purpose for visiting is to explore the area around Wrigley Field, this is a good option.

However, there aren’t as many hotels in this area, and thanks to a cheap and efficient public transportation system, it’s easy to get from the downtown area to Wrigleyville, so staying in this area isn’t a necessity and in fact if you plan on exploring Chicago, it makes more sense to stay at a hotel near Michigan Avenue.  But, if you want to stay at a hotel near Wrigley Field, here are a few options.

Days Inn Chicago – The Days Inn is situated on the north end of Lincoln Park, on Clark at Belmont. From here, guests have easy access to the Lakefront, Lincoln Park, and lots of dining and drinking options. It takes about 10-15 minutes to walk to Wrigley Field from the hotel.

City Suites Hotel – From the City Suites Hotel, the Belmont Red Line station (from which the Addison station is one stop away)  is less than two minutes’ walk; the ballpark is another 10-15 minutes by foot, past plenty of restaurants, bars and shops. Downtown is about 10-15 minutes via el.

Majestic Hotel – The Majestic is tucked off a side street, steps from the Lake and near Addison in Lakeview. It’s less than 10 minutes by foot to Wrigley Field and multiple buses pass by and take about 15 minutes to reach Michigan Avenue downtown.

Windy City Urban Inn – For a more homey feel, check out the Windy City Urban Inn, located in a Victorian home on a side street in Lincoln Park. Apartment rooms offer full kitchens, and the location is close to Clark and Fullerton, about 10-15 minute by el to both downtown to the south and Wrigley Field to the north.

Old Chicago Inn – The Old Chicago Inn is another bed and breakfast option near Wrigley. Four blocks south of the field, it is situated on Sheffield at Belmont, just steps from the el station.