How to Get Between Midway and O’Hare Airports

The question was recently raised on Twitter: is it worth it to switch between Midway and O’Hare airports for a lower fare? The answer: well, that depends. It depends on how much money you’ll save, how much time you have to make the switch, and how much your time and effort is worth. If you’re considering transferring flights between Midway and O’Hare, here’s what you need to know. 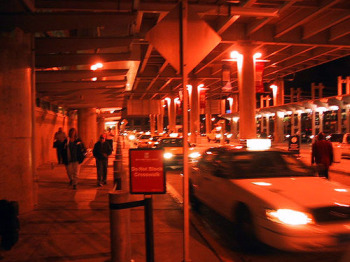 A taxi between Midway and O’Hare will have have to travel about 30 miles, mostly on the expressway. This could take as little as 30 minutes with no traffic, or up to an hour (maybe more) in heavy rush-hour traffic. If you are traveling mid-day, count on at least 45 minutes to be safe.

Both Chicago airports are connected to the city by public transportation. O’Hare is accessed via the Blue Line, while Midway is reachable by the Orange Line.

Unfortunately, these two lines don’t intersect, so coming from Midway,you will have to get off the Orange Line at the Library stop, walk north on State, and go west on Jackson to Dearborn. The walk will take less than five minutes, but it does require stairs, so it can be difficult if you have a lot of luggage. From there, take the Blue Line to O’Hare.