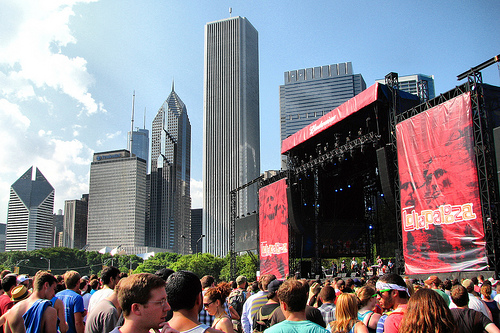 Lollapalooza takes place next weekend, August 5 to 7 in Chicago’s Grant Park. Tickets are sold out (though you may be able to score some from scalpers or online – at a premium) so if you’re headed to the Windy City for the 20th anniversary of the music festival, prepare to face some serious crowds at the concert.

Though tickets for the show are sold out, Lollapalooza travel deals for flights and hotels are still available.  There are some cheap hotels in Chicago still offering rooms for less than $100 per night, and if you attempt to haggle on the rate, some places may be flexible in a desire to full unsold rooms. Staying closer to Grant Park will save you time, but these will be the most expensive options. If you’re willing to head a bit north – even as far as Lakeview – you can save some money. And thanks to a cheap and efficient public transit system, you can still get around and to the festival grounds easily from most areas of the city.

Hopefully you’ve already bought your flights to Chicago; if not, good luck trying to find a reasonable fare! The bad news is that finding an affordable flight at this late stage will be nearly impossible. The good news – for those in the Midwest anyways – is that Chicago is easily accessed by train, car or bus from many major cities in the area. If you are coming from Detroit, St. Louis, Kansas City, Milwaukee or Minneapolis, you can get to the city for around $50 each way, or sometimes less. Driving is also an option, just check out the cost of parking at your hotel; some places can charge close to $50 each day, negating any savings.