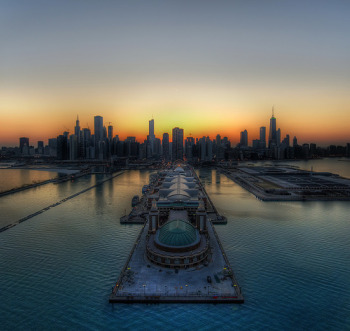 Chicago is one of the most popular urban Labor Day weekend destinations in the US. The city is large enough that there is plenty to do and most of the major museums and attractions are open, yet it’s still a small enough city that you can feel like you’ve seen and done quite a bit in just three days.

Located in the Midwest, Chicago is fairly easy to get to from most destinations. There are direct flights from nearly all major cites, like New York, Los Angeles, Miami, Denver, Houston, Seattle, Las Vegas, and many more. There are two airports: O’Hare (which is a hub for United and accepts international flights) and Midway (a smaller airport serviced by Delta, Frontier, Porter, AirTran, and Southwest).

The weather in Chicago in early September is quite pleasant too. Expect warm days and slightly cooler nights…though this is Chicago so come prepared for anything from 65 degrees on up to 100, anything from sunshine and humidity to cold rain.

>> what to wear in Chicago in summer

As a tourist, you’ll want to stay at a hotel on or near the Magnificent Mile (Michigan Avenue between the River and Oak Street), in the Loop, or near Grant Park. These areas will provide the easiest access to most downtown attractions and allow you to quickly hop on a bus or train to explore further out of the Loop. If you want to explore the neighborhoods a bit more, there are some great, inexpensive hotels in Lakeview, Lincoln Park and Bucktown. It’s not recommended that you stay near the airport. The 45-minute ride into the city will quickly become annoying, and having a car in the city is more of a hindrance than a help. Most hotels in the city charge a premium for parking space, so if you must have a car looking into airport parking at O’Hare. You’ll need to then take the train downtown, but you may save money.

Chicago is a foodie town and there are a ton of great restaurants, ranging from cheap eats like hot dogs and BYOB ethnic eateries, to multi-course menus created by celebrity chefs.

What to see and do:

September is a near-perfect month in Chicago. It’s still warm enough to wander around the city all day, picnic in Grant Park, and hit the beach. Or you can shop on Michigan Avenue, hop a sight-seeing bus, or explore the city’s great museums/

Getting out of the city:

There are lots of worthwhile day and overnight trips from Chicago. Head north to Milwaukee and Madison, Wisconsin, or jaunt east to the shores of Lake Michigan and Michigan’s southwest wine country. If you’ve got more time you can even hop a short flight to explore other Midwest cities like Indianapolis, St. Louis, Detroit, or Kansas City. All are just an hour away by air and deals from Chicago are easy to fine.

Photo by Stuck in Custom