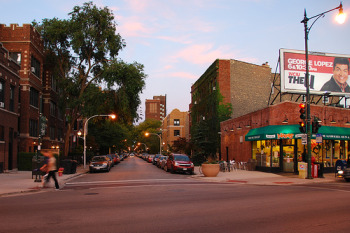 The Lakeview neighborhood is considered by many to be one of the city’s most livable areas. It’s located along the Lakefront (hence the name) and is home to both young families, co-eds, and many post-grads under 40. Lakeview is known for its abundance of restaurants (many of which are BYOB), its many boutiques, and its great nightlife.

Lakeview is actually divided into three smaller enclaves, each with its own distinctive look and lifestyle. Lakeview East, which is usually just called Lakeview, encompasses the area from Diversey north to Irving Park, and from Clark to Lake Shore Drive. In this area you’ll find trendy restaurants like Asian-fusion Ping Pong and  Italian BYOB Adesso along the main drag, Broadway. Down the side streets, you’ll see a more residential side of the area, full of apartments and historic greystone buildings. Lakeview stretches east to the Lakefront Path, where you’ll find a biking and running trail that runs from much farther north all the way to the city’s South Side.

Boystown, the stretch of Halsted between Belmont and Addison, is known as Chicago’s “gayborhood”, because it is home to much of the city’s gay community, many gay nightclubs, gay-owned businesses, and adult shops. Though the area was once dominated by gay Chicagoans, more yuppies and young families have moved in, and the neighborhood’s wild side has been taken down just a notch. Well, that’s true on most days anyways. When the Gay Pride Parade and Market Days (the largest street festival in the Midwest) take place, the area becomes a little less family-friendly due to the prominence of half-naked menu and sex-toy-wielding drag queens. That’s not to say the events aren’t a great time (they are), you just might want to leave the kids at home for the day.

Lakeview’s other mini-hood, Wrigleyville, is located along Clark between Irving Park and Belmont. Wrigley Field is located at Addison and Clark, and during baseball season the area is overrun with Cubs fans before and after every game. Bars like the famous Cubby Bear or Harry Caray’s start to resemble wild frat parties, so if that’s not your scene, it’s best to stay away on game days.

Lakeview may lack the glittering skyscrapers and historic buildings of Chicago’s downtown area, but it is an area that’s home to many people. If you want to see Chicago from a local’s perspective, head up to Lakeview for an afternoon along the lake or an evening enjoying the area’s nightlife.