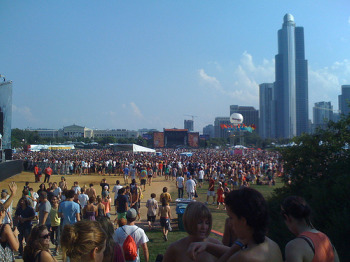 Lollapalooza is just over a week away, but that doesn’t mean it’s too late to plan a trip to Chicago to check out one of the best outdoor summer music festivals in the country. Three-day general admission passes are still on sale for $215 each, and single day passes are available for $90 each (though be away there is no re-entry with single day passes).

Lollapalooza travel deals are still available.  Official three night general admission packages that include hotel are $1129 for two people, of if you’d prefer to book a la carte, you may be able to find some cheap hotels in Chicago offering rooms for less than $100 per night, which could equal big savings if you are traveling with at least one other person.

The best Chicago hotels for Lollapaloozo will be located closest to Grant Park (or course, these will be the most expensive). You can also look in what is technically the South Loop (anything south of Jackson, but north of Roosevelt will be ideal) like the Blackstone Hotel.

If you’re on a budget, consider staying at the Hostelling International Hostel, where dorm beds start at $29 each, or look at hotels further north, in Wrigleyville or Lakeview. If you want to do some sightseeing outside of Grant Park, stay at a hotel on or near the Magnificent Mile to be located to most of the other major sights.

The budget-killer for your last-minute trip to Chicago for Lolla may be the airfare to Chicago. You could lucky with a great deal, but it’s more likely that airfare at the 11th hour will be pretty pricey. Luckily, there are lot of other options, especially if you are in or near the Midwest. In addition to flying or driving, you could take the train, or the inexpensive Megabus, which serves Chicago from Detroit, Cleveland, Cincinnati, Minneapolis, Madison, Milwaukee, Indianapolis, St. Louis, Kansas City, and other surrounding cities.