Millennium Park was built in 2004 and occupies 24.5 acres of the northwest corner of Grant Park. Admission is free and the park is the second most-visited tourist attraction in the city (after Navy Pier), mostly thanks to a few notable structures of design, including the Cloud Gate sculpture, Crown Fountain, and the Jay Pritzker Pavilion. The park hosts free ice-skating in the winters and free musical performances in the summers.

>> more about free summer events in the park 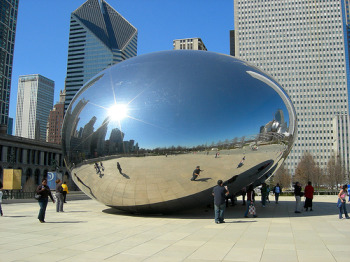 Cloud Gate, or the Bean, is the most recognizable feature of Millennium Park. The first time you see “Cloud Gate”, you may wonder what this shiny blob of metal is and what it’s doing plunked in the middle of the park. The amorphous-looking silver blob is the result of an art competition held in 1999. When Millennium Park’s planning officials decided they wanted a sculpture to sit on the roof of the Park Grill, they held a worldwide competition for the best design. Over 30 artists, including Jeff Koons, submitted ideas but it was internationally-acclaimed artist Anish Kapoor who was chosen as the winner. He conceived the Bean to look like a drop of mercury that was just about to splash onto the ground.

Kapoor named his sculpture Cloud Gate because he felt that the part of the sculpture that reflects the sky acts like a gate to close the gap between the sky and the person viewing it. But it’s much more commonly referred to as “The Bean” because of its legume shape. The sky and city are reflected and distorted by 168 polished steel plates that total 110 tons. Those plates stay shiny thanks to park workers who spray the lower portion down with Windex twice a day. The top of the Bean gets a thorough cleaning with Tide twice a year.

Construction of Cloud Gate proved to be a challenge. The sculpture cost $23 million in private funding to complete, significantly over the original estimate. The two-year construction ran behind schedule. The structure’s final 110-ton weight was nearly double the original estimate. But when it was finally unveiled in May of 2006, it became one of Chicago’s most beloved and popular landmarks. All year round, you’ll find people gathered in front of the Bean, awed by the city skyline reflected back at them or giggling at their fun-house images in the steel. “The Bean” truly belongs at Millennium Park – Kapoor’s contract dictated that the sculpture last at least 1000 years. 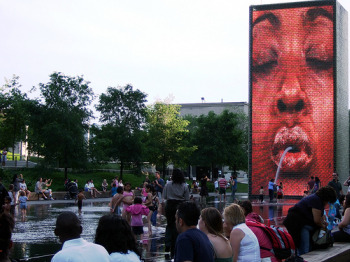 The Crown Fountain was named for a local family and features two 50-foot towers on either end of a plaza. The plaza is submerged in an eighth of an inch of water, and the the two towers are made of glass bricks with LED video screens behind them.

The video screens shows various adults and kids spouting water from their lips, which then actually spurts out from the fountain. It’s a very cool visual effect, but on the hottest summer days kids seem to appreciate the fountain more for its ability to cool them down than to entertain.

Though not as widely recognized, nor of as much interest to kids who want to make funny, distorted faces in a shiny surface, the Jay Pritzker Pavilion is the largest structure in Millennium Park. 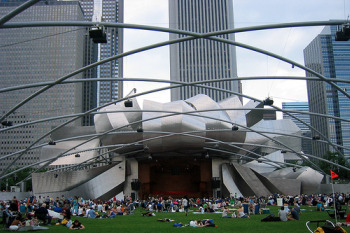 It was designed by Frank Gehry with 4000 fixed seats and lawn seating for 7000. The silver structure was designed to look like a flower blooming or the sails of a ship unfurling, though that almost wasn’t to be. In 1844, the land was designated as “public ground forever to remain vacant of buildings” and height restrictions were enforced on anything built in the park. When the Pritzker Pavilion was built, it was classified as a “work of art” rather than a building to skirt those restrictions. Now it’s a cherished park of the park, and free musical performances, including the Grant Park Music Festival, are held here throughout the summer.

Other unique aspects of the park are the the 2.5 acre Lurie Garden, which makes up part of the world’s largest green roof, the BP Bridge, which was the first designed by Frank Gehry, and the Wrigley Plaza, which contains a nearly full-sized replica of the semicircle of paired Greek Doric-style columns that originally sat in Grant Park in the early 1900’s. There’s also the Harris Theatre, the McDonald’s Cycle Center (a bike station for those who ride to work), the Exelon Pavilions, which provide solar energy, and plenty of open space.