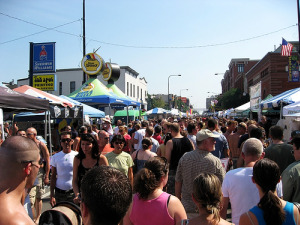 In the warmer months from May to September, it seems like there is always a street festival going on in Chicago. We’ve got festivals that celebrate neighborhoods (Retro on Roscoe, Summer on Southport), food and drink (Pizza Fest, Windy City Wine Fest), ethnicities (Celtic Fest, Chicago Turkish Festival) and more. There’s even a “Jeff Fest” which, as far as anyone can tell, is just an excuse to throw yet another weekend street party in the city.

While the theme and location of each festival differs, they all seem to follow the same pattern. Most are held Saturday and Sunday and ask for either a donation or a nominal admission fee. At each one, you’ll find multiple drink and food vendors keeping the crowd full of tasty bites and cold beers. There are live performances from local and big-name acts plus usually at least one cover band, sellers hawking everything from knock-off designer sunglasses to handmade crafts, and a whole bunch of locals relaxing in the sun and having a great time.

Some fests have a more “single and mingle” vibe, while others are perfectly appropriate for kids. It’s not unusual to see mulptile generations at one fest. A set of young parents will rock out to the band while the grandparents drink some beers and watch the baby play on a picnic blanket at their feet.

Here are some the best fests to mark on your summer calendar.

The Explore Chicago website has a full list, updated often, of each of the summer neighborhood festivals.