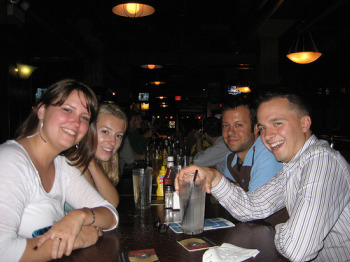 One of the best things about Chicago is that there is always something to do: a new art exhibit in town, a new restaurant to try, and a great bar to enjoy for the night. Whether you fancy dancing the night away, romancing your date in a candlelit lounge, drinking beers in a pub, or hanging with friends at a dive bar, there’s a place for you to have a few drinks in Chicago.

Fortunately, many of the city’s bars seem to be grouped by style around different neighborhoods, so it’s easy to go from bar to bar without having to travel too far to find another place you’re sure to like. Here are the neighborhoods to hit up, according to bar style.

Hotel bars
Of course, the hotel bars are where the hotels are, which means predominantly in the Loop and near the Magnificent Mile. JBar at the James Hotel and Elate at the Hotel Felix are known as a good spots for celebrity spotting,  the bar at the swanky Peninsula is perfect for an elegant night out, and Nomi Lounge at the Park Hyatt is the place to go for cocktails with a view.

Dance clubs
River North and the Rush/Division area (also called the “Viagra Triangle” for the ratio of older men to young women) host most of the city’s larger dance clubs. These are the velvet-rope, bottle-service, see-and-be-seen kinds of places where drinks are pricey, there’s usually a cover charge, and the dress-code is strictly enforced.

Sports bars
Many of Chicago’s sports bars seem to be concentrated in Wrigleyville, along Addison and Clark near Wrigley Field. Places like the Cubby Bear and Harry Caray’s cater to the pre-and post-game crowd with hearty bar food like burgers and wings, outdoor patios, and plenty of cold beer. These bars can get a little wild after a game, so it you don’t feel like being transported back to your college frat-party days, it’s best to avoid them on game days.

Gay bars
Boystown, located on Halsted and Broadway streets between Addison and Belmont, is Chicago’s unofficial “gay-borhood”. It’s home to dozens of gay bars and clubs like Roscoe’s, the Closet, and Kit Kat (where there are live drag shows several nights a week). Further north in Andersonville, there is another, smaller pocket of gay bars. These bars are all straight-friendly too, and many (like Kit Kat) are popular with bachelorette parties.

Dive bars
Chicago’s dive bars are located all over the city – you’ll find one or two scattered here and there in every neighborhood – but there are also a few pockets of heavier concentration in hoods like Bucktown/Wicker Park and Logan Square. As these areas become more trendy, the true dive bars become harder to find and are replaced with hipster bars masquerading as dives, but if you look carefully you can tell which is a real dive (hint: it’s the one with cheap beer, old bartenders, a screen door, and regulars who look like they’ve been there since the dawn of time).

Beer bars
With its origins as a hard-working, blue-collar midwest town, it’s no wonder that resident of Chicago have a long tradition of drinking good ‘ole American lagers like Budweiser and Coors. But in the past several years, that has started to change – we’ve even had a few breweries open up in the city limits. Chicago may not be as synonymous with good beer as say, Denver or Portland, but we now have some great beer-centric bars that offer stellar selections of craft beers from around the world. For the best beer selections, check out Quencher’s, The Long Room, The Map Room or the Globe.

>> more on breweries and brewpubs