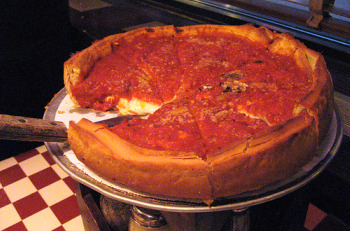 Deep-dish pizza is nearly synonymous with Chicago. New Yorkers love to engage in the New York vs. Chicago-style pizza debate and tourists love to sample it while in the city, but truth be told, a lot of local Chicagoans prefer thin crust to deep dish. I know it sounds like blasphemy, but I actually prefer the thin stuff too.

Deep dish pizza definitely has its perks though. The cornmeal crust is tasty and hearty and the layers of cheese, meat and sauce are sure to fill you up. On a cold night, the load of carbohydrates deep dish pizza delivers will keep you warm and full, even if you only eat one slice. A deep dish pizza doesn’t mess around. It’s big- really big – and for some people, it’s just too much.

Deep dish pizza was conceived at Pizzeria Uno in Chicago in 1943. The chef at the time, Rudy Malnati, developed the pizza, which features a thick cornmeal crust topped with cheese and meat or veggie toppings, and then a thick layer of chunky sauce on top. Though Uno was the first place to offer the pizza, several others quickly followed, including Original Gino’s, Gino’s East, and Lou Malnati’s (opened by Rudy’s son).  Giordano’s came onto the deep-dish scene in the 1970’s and now the original four (Gino’s, Lou Malnati’s, Uno, and Giordano’s) vie for top honors.

Hundreds of smaller pizza parlors and city-wide chains also offer both deep-dish and thin crust pizzas. While not all Chicagoans agree that deep dish is best, most can be counted on to admit that pizza – in whatever form you prefer – is one of the great culinary wonders of the city.