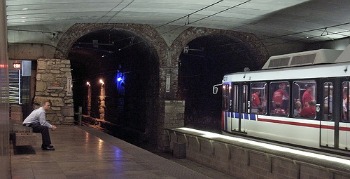 Like many Midwest cities, St. Louis is a driving town. Most people use cars as their main form of transport, the bus is generally only used by the few without their own wheels, and it’s impossible to hail a cab on the street (you’ll need to call ahead and wait about 10 minutes). But, that doesn’t mean that visitors to the city will be at a disadvantage without a car. If you’re comfortable riding the bus, are staying in a hotel downtown, and are ready to do a bit of walking, you can get around the major tourist attractions without one.

Public transport in St. Louis is made up of bus and a light rail system, called MetroLink.

MetroLink connects the airport to many areas of the city, even across the river into Illinois. On weekdays it runs from 4:32am to 12:08am from the airport; on weekends it shifts to 4:54am and 12:22am. Fare cards can be purchased from vending machines at each stop. Just be sure you validate the card before boarding; if you’re caught without a valid fare card, you’ll face fines.You can buy a single fare, a two-hour pass, or a full-day fare.

Several bus routes crosscross the entire city of St. Louis, going into the surrounding suburbs. Routes vary by day and hour, and the easiest way to plan your route is to plug your starting and ending points into Google maps. The #99 Downtown Trolley serves  downtown hotels,  America’s Center, City Museum, Citygarden, Kiener Plaza & the Old Courthouse, making it a useful route for tourists. Bus operators do not make change, so exact fare or a farecard is required.