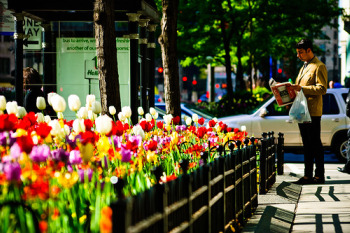 Forget Cancun, Fort Lauderdale, and all those other typical Spring Break destinations. Sure, they’re great places to go if you want to work on your tan, escape the cold, or spend a week relaxing in the sun. But if that’s not your scene or you’d prefer an action- and culture-packed city break, check out Chicago. Here are five reasons why the Spring Break months of March and April are wonderful times to visit.

Now is a great time to score hotel deals.
Fewer people visit Chicago in the early spring, which means hotels roll out great rates and deep discounts in order to beef up business. That means this is your chance to book nights at hotel like those on the Magnificent Mile for much less than you would usually pay. For travelers on a budget, cheap Chicago hotels are even cheaper and it’s easy to find a room for under $100 per night.

Getting here is cheap and easy.
From any major city and from most places in the Midwest, getting to Chicago is a quick plane, train or bus ride that won’t break the bank. You can find cheap tickets to Chicago on most airlines during this period as well.

Chicago knows how to party.
If your Spring Break falls during the week of St. Patrick’s Day (March 17), you’ll see just how wild city residents can be when they take to the streets for the St. Pat’s parade, dye the Chicago River green, and drink green beer by the keg. Even without such a great excuse, Chicagoans still love to have fun and no matter what your nightlife style – dive bar, dance club, gay bar, or swanky lounge – we’ve got a place for you to let loose for the night.

Colder temps equal fewer crowds.
Summers are beautiful in Chicago, and everyone knows it. During peak times, the city gets packed. The beaches are lined with bodies baking in the sun. Michigan Avenue becomes nearly impassible. And waits for the elevators to the top of  the Willis (formerly Sears) Tower – considered one of the best observation decks in the world – become unbearably long.  But during March and April the streets are crowd-free, meaning you can enjoy the city (and those beautiful views) without being surrounded by thousands of other tourists.

You can see a lot in little time.
If can’t get away for a full week for your Spring Break, you can enjoy the highlights of Chicago in just a few days. You certainly won’t see it all, but you can get a good taste of the city in a long weekend.