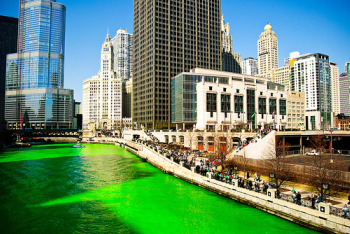 St. Patrick’s Day in Chicago isn’t just an excuse to consume a few pints of green beer. Here in the Windy City it’s the ultimate day (or in most cases, weekend) of celebration. The Saturday before the holiday, the St. Patrick’s Day Parade takes over downtown, and long before the the Parade’s noon start time, locals and visitors begin the festivities. Bars open early to serve Irish breakfast specialties like corned beef and cabbage, pints of Guinness, and glasses of frothy green beer.

At 10:45, boats take to the Chicago River and begin pouring barrels of green dye into it. The dye is non-toxic and dissipates in a few hours, but from morning until late afternoon, the Chicago River is a shocking shade of neon green. Many revelers watch the dyeing of the river from the Michigan Avenue or State Street Bridges or from the banks of the River on Upper Wacker Drive.

The parade starts at noon at Balbo and Columbus in Grant Park and heads north past a viewing stand at Buckingham Fountain. Over 200,000 people come to watch the parade every year, which features over 100 floats. As of 2010, the annual South Side Parade, known for being bigger and rowdy (thanks to lots of alcohol consumption from the bars along the route) has been cancelled, so many more people may attend the downtown parade in its place. The Chicago St. Patrick’s Day Parade website lists the day of the event each year and shows a map of the route.

Once the Parade is over, the party keeps on going. People dresses in all green, funky hats and shamrock-shaped glasses flood the streets and take over every Irish pub in sight. The celebrations continue long into the night, or until the green beer stops flowing.

If St. Patrick’s Day doesn’t fall on a weekend, you can expect a pared-down repeat of the party on the actual day. Many people take the day off from work and start their morning with beer and eggs and keep drinking right on through dinner.