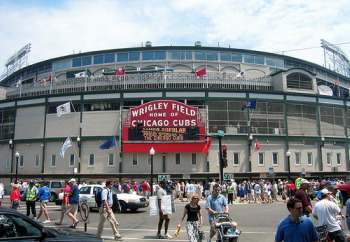 Chicago is home to two Major League Baseball teams – the Chicago White Sox, who are based out on the south side, and the Chicago Cubs, who make their home in the north side’s Wrigley Field.

Wrigley Field is the 2nd oldest baseball stadium still in use. It was built in 1914 and seats about 40,000 people. It’s located at Addison and Clark, in the area now known as Wrigleyville, at the Addison Red Line stop (which is about a 15-20 minute ride from the Loop).

Eating and drinking at Wrigley

Sometimes it isn’t clear what the real draw of Wrigley is for many people – is it the chance to watch the Cubs play, or the opportunity to get rip-roaring drunk in the middle of the day? After games, the area around the stadium gets notoriously packed with people who’ve clearly been enjoying a few beers during the game. If you want to be one of them, you’ll have plenty of options.

The new Captain Morgan Club is an indoor/outdoor venue offering food and drink to both ticket holders and non-attendees, so if you want to be close to the action but don’t have a ticket, or are attending the game but meeting up with friends, it’s a good option. Other dining and drinking choices inside the stadium include beers, mixed and frozen drinks, hot dogs, pizzas, bratwursts, burgers, salads, pretzels, chips, candy and ice cream – basically all your ballpark favorites.

>> where to eat and drink near Wrigley

Alcoholic beverages will not be sold after the 8th inning during day games or after the 7th inning (or 9:20 p.m.)  for night games. Children under 2 are free if they sit on the adult’s lap. Guests are allowed to bring in one liter of factory sealed bottled water in a soft-sided cooler, but glass bottles, alcohol, and hard coolers are prohibited. Bags will be checked upon entering; re-entry is not allowed.

Fans are permitted to keep foul balls and home runs hit into occupied seating areas as souvenirs; however, fans are not allowed to enter the playing area or interfere with the game. Tailgating is not allowed at Wrigley and police will enforce open container laws.

Tickets can be purchased online or at the ticket window at Wrigley Field. Games to sell out and scalping (though prevalent) is illegal, so it’s highly recommended that you buy tickets as far in advance as possible.

Tours of Wrigley Field are available daily from April to October for $25 each and must be purchased in advance.

One of the most unique features of Wrigley Field is the rooftops that were built in the last 15 years on the buildings across the street. Because one side of the stadium is much lower than the others, people sitting on bleachers on these rooftops are afforded an unobstructed view of the field.  Tickets for the rooftops are very expensive – about $100 per person – but include unlimited food and drink. These tickets are also usually more easily attainable than regular stadium tickets, so if Wrigley is sold out and you’re set on seeing a game, consider one of the rooftops.