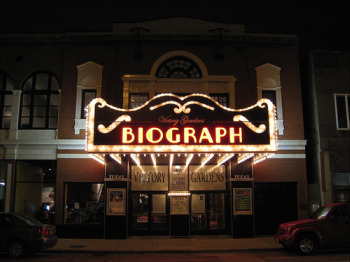 Most people know that certain films – The Dark Knight, Blues Brothers, Adventures in Babysitting – were filmed in Chicago. But there hundreds of others that are lesser known, and the city has a long history with feature films, dating as far back as 1910.

For a unique tour of the city that combines traditional sightseeing with entertainment and film history, check out the Chicago Film Tour.

The Chicago Film Tour departs from the Rock n’ Roll McDonald’s  (seen in the film Eagle Eye) Thursday through Sunday at 10:30am and 12:30pm. The two hour tour passes by over 30 sites used in about 50 movies. It runs from downtown up to Uptown and then back down to Chinatown, so it’s a great way to cover lots of ground and see the majority of the city in a small amount of time.

Each bus only holds 45 people; some of the streets require a smaller vehicle, so you don’t feel as though you are on a large tour bus. The buses have bathrooms and passengers are allowed to bring on any food and drink they want – yes, including alcohol. Each bus is also equipped with tv monitors, a feature that really increases the quality of the tour. You see, as the bus passes each location, the guide will play a short film clip featuring that site. One of the best parts of the  tour is the chance to see the location portrayed on film and then compare it to the real thing.

Some of the sites visited include Hotel 71 (site of Bruce Wayne’s penthouse in The Dark Knight), the Biograph Theatre (where John Dillinger was shot in Public Enemies), Emmit’s Pub (used in Ocean’s 11), and the Ambassador East Hotel (filmed in North by Northwest and No Mercy, among others).

While the tour is ideal for tourists, it’s also entertaining and information for residents as well. Though I’ve been living in the city for several years, I had no idea that so many movies – the tour covers about 70 – were filmed here, including some of the early silent films. Many of these, including some with Charlie Chaplin, were filmed at Essenay Studios, which is now St. Augustine College on the city’s north side.I also learned a lot of trivia about the city, even some that wasn’t strictly film related.

Beyond serving as a set for movies, the city is tied to the film industry in many ways. Walt Disney was born in Chicago, what is now Universal Studios started here, Siskel and Ebert were born here, and the Oscar statuettes (along with the Emmy, Cleo and MTV awards) are produced here.

From Chinatown (where many of the scenes of Backdraft were filmed) to the Loop (setting for countless movies like the Dark Knight, Ocean’s 11, The Break-up, Ferris Bueller’s Day Off, High Fidelity, While You Were Sleeping and Stranger Than Fiction) up to the northside (where parts of Risky Business, a League of Their Own, and The Untouchables were shot), the tour covers pretty much the whole of Chicago and offers a behind the scenes glimpse of the city’s connection to Hollywood. It’s part film history class, part Chicago tour, and lots of fun.

Tickets for the tour are $30 per person.