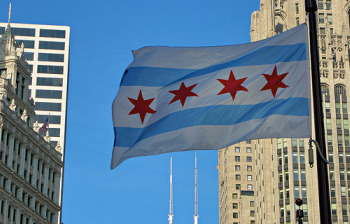 The Chicago city flag has two light blue stripes running horizontally across a white background. Between the two strips are four red stars, each with six points.

In 1915, Mayor William Hale Thompson appointed a flag commission. One of the commission members, impressionist painter Lawton S. Parker, chose poet Wallace Rice to develop rules for a public competition to design the flag. Over a thousand entries were received, but the design chosen ended up being the one that was created by Wallace Rice. The flag design became official in 1917.

The three white stripes of the flag represent the north, west and south sides of the city. The North Branch of the Chicago River and Lake Michigan are represented by the top blue stripe; the South Branch and the Great Canal are shown by the lower one.

The four red stars represent significant events in Chicago’s history, including the Great Chicago Fire and the World’s Columbian Exposition (both stars/events original to the flag’s design), the Century of Progress Exposition (added in 1933) and Fort Dearborn (added in 1939).

The addition of a fifth star has been proposed on multiple occasions – had Chicago not lost the 2016 Olympic big to Rio de Janeiro, a fifth star would most likely have been added to commemorate the event.