The Gold Coast, the Magnificent Mile, and Streeterville 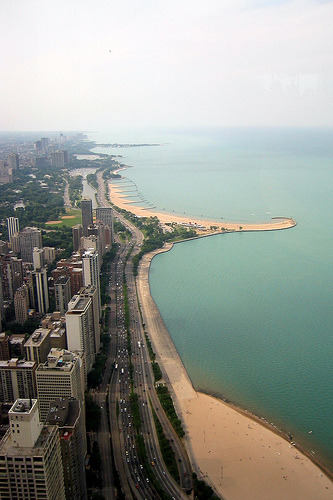 The Magnificent Mile, the (approximately) one-mile-long stretch of Michigan Avenue just north of the Chicago River, is known for its luxury highrises, fancy boutiques, hotels, and increasingly touristy selection of restaurants. Eight Chicago landmarks and four of the ten tallest buildings are located along the Mile, along with three upscale shopping malls and the only three 5-star hotels in the Midwest.

The Mile is located in Streeterville, which runs from the Loop to the south to Division Street to the north, and from Michigan Avenue to the west over to the Lake on the east.

The area is home to some of the city’s tallest skyscrapers, including the John Hancock Building, and some of its most exclusive boutiques and restaurants, including Les Nomades, Gucci, Louis Vuitton, Harry Winston, Hermes and Chanel. Along Lake Shore Drive, Streeterville contains some of the most expensive residences in the city, all with sprawling views of the Lake.

It’s well worth your time to take a carriage ride around the area, or just stroll by on foot, window shopping along the Magnificent Mile and marveling at the beautiful skyscrapers and luxury highrises along the Lake.

Just north of Streeterville (and often lumped in with it geographically), lies the Gold Coast, which extends north to North Avenue and west from the Lake to Clark Street.

During the 1800’s, the Gold Coast was home to the city’s elite. But when Potter Palmer, owner of the Palmer House Hotel, built a mansion further north, many people began to migrate and the area lost some of its luster. In the late 70’s, it was listed on the National Register of Historic Places and once again became home to the city’s most well-heeled residents.