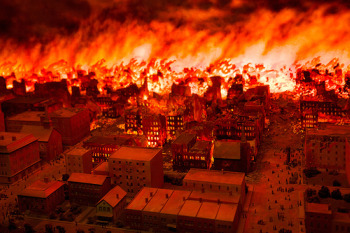 Late one night, when we were all in bed,
Old Mother Leary left a lantern in the shed;
And when the cow kicked it over, she winked her eye and said,
“There’ll be a hot time in the old town, tonight.”

In October of 1871, a fire started near the O’Leary Barn in Chicago. The fire spread quickly and soon raged out of control. The fire, which would later become known as the Great Chicago Fire, burned from Sunday night to Tuesday morning and destroyed four square miles of the city. It spread from downtown north nearly to Fullerton in Avenue. In terms of modern neighborhoods, the Loop, the Magnificent Mile, the Gold Coast, River North, Old Town and Lincoln Park would all have been significantly damaged.

The Fire
It’s said that several factors were responsible for the speed with which the fire grew. At the time, nearly all of the city’s buildings were made of wood and were built quite close to one another. There had been a recent drought so everything was very dry, and a strong wind was blowing, helping the fire to spread. Additionally, some historians say that city residents did not react quickly enough to the blaze, and that firefighters were slow to respond because they were tired from fighting a blaze the previous day.

Once the alarm was pulled, the fire fighters were sent in to fight the blaze – but in the wrong direction. By the time they reached the barn, the fire was out of control. Wooden cargo ships lining the Chicago River, and the wooden walkways over the River, helped it spread north and superheated winds carried the flames even further, ignited rooftops in the distance. When the fire destroyed the waterworks building, the water supply was cut off, and efforts to stop the flames ceased.

By the time the fire finally fizzled out, after the winds stopped and a light drizzle began, it had burned through 34 city blocks. For several days, the remains of the city were still too hot to enter.

The Destruction
In total, the fire destroyed more than 2000 acres of land, 73 miles of roads, 120 miles of sidewalk, 2,000 lampposts, nearly 18,000 buildings, 2-3 million books from private collections, and over $200 million (in 1800’s prices!) worth of property, which amounts to about a third of the city’s total valuation. Final fatalities were estimated at around 200.

Ironically enough, the O’Leary house was spared thanks to shifting winds. Other notable buildings that survived the fire are the Holy Family Church, St. Michael’s Church, Old St. Patrick’s Church, and the Chicago Water Tower, which is now an unofficial memorial of sorts.

The Rebuild
Just 22 days after the fire, Chicago hosted the World’s Columbian Exposition and welcomed 21 million people to the city. Within a few months, Potter Palmer (whose original Palmer House Hotel had burned in the fire, just 13 days after its grand opening) opened the Palmer House Hotel on State Street and declared it to be “the world’s first fire-proof building.”

Over the coming years and on into the next century, Chicago continued to rebuild, this time will steel, glass, and stone. Though the fire was devastating, it also ushered in a new era of progress and a building boom for the city.

In 1956, the O’Leary property was demolished and the site became the new home of the Chicago Fire Academy.

The Theories
Shortly after the fire, Michael Ahern, a reporter for the Chicago Republican, published a story blaming Mrs. O’Leary for the fire Ahern claimed that Mrs. O’Leary left the lantern in the barn and when her cow kicked it over, the fire began (hence the song above). More than 20 years later, Ahern admitted that he made up the story, but the damage was done. For the rest of her life, Mrs. O’Leary was blamed for the fire that destroyed Chicago, and according to a descendant, she “died heartbroken.”

Another theory was that Daniel “Pegleg” Sullivan, who first reported the fire, was the one who started it. Some think he was trying to steal some milk and accidentally set some hay on fire. A less likely theory is that the fire was caused by a meteor shower. The fact that four large fires all took place on the same day, all nearby to one another, has led some scientist to believe that a meteor breaking up over the city caused the fire.

Perhaps the most salacious recent theory was developed by reporter Anthony DeBartolo and involves Louis M. Cohn, a prominent Chicago businessman, world traveler, and Treasurer of the Board of Trustees of the Chicago Elks. Cohn is the only person to have (allegedly) admitted to starting the fire, claiming in 1944 that he and Mrs. O’Leary’s son (who grew up to be “Big Jim” O’Leary, a well-known gambler and operator of off-track betting establishments) and several others, were in the barn shooting craps by lantern light. Cohn, who was 18 at the time of the fire, claimed he knocked over the lantern and when the fire started, everyone fled. Cohn, however, stopped to pick up his winnings.

According to gambling historian Alan Wykes, Cohn added the following sentence to the end of his will: When I knocked over the lantern, I was winning.