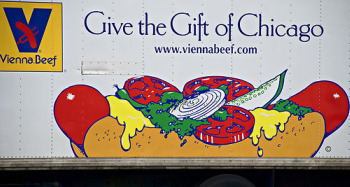 There’s an old saying about how you never want to see how your sausage is made, but that’s exactly what you can do when you tour the Vienna Beef factory in Chicago. First introduced for the World’s Columbian Exposition in 1893, Vienna beef sausages became an instant hit in Chicago and around the Midwest. They’re now synonymous with Chicago style hot dogs, but hot dogs aren’t the only thing they make. In fact, they produce over 200 different products, including hot dogs, sausages, salami, brisket, pastrami, and other deli meats, plus over 50 varieties of soups and stews. And everything is made at the same location on Damen avenue where it’s been made for over 30 years (after moving from the smaller Halsted street location where it started in 1894).

Visiting the factory isn’t just the proverbial look at how the sausages are made, it’s a look at a piece of Chicago’s food history and one of its most lucrative industries today. The factory produces over 200 million hot dogs alone each year, not to mention millions more pounds of other meat products. The factory is also the largest consumer of dry ice in the Midwest. Getting into the tour isn’t easy. I called to book my tour in May and was finally offered a date in August. The tour is only conducted once a week (Wednesdays at 10am) and only accommodates six people at a time. The tour is given by Bob Schwartz , the senior Vice President, who not only has been with the company for over 40 years, he also authored the book “Never Put Ketchup on a Hot Dog.”

Before I arrived for the tour, I’d read over the somewhat intimidating list of rules posted on their webpage: no jewelry except plain wedding bands, no bare legs, no open toed shoes, no bags, no cellphones, no cameras. But once we began the tour, I understood exactly why those rules are in place. 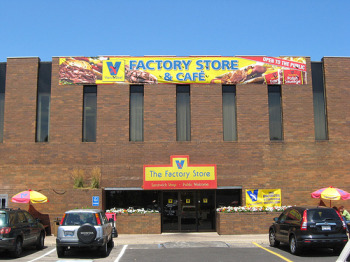 Upon arrival at the factory, we checked in and were given a coupon for a free hot dog and fries in the onsite deli. I couldn’t help but wonder though, after seeing how hot dogs are made, would I ever be able to eat one again? From there, we signed waivers and donned the large white smocks and unflattering hairnets required on the factory floor. The women like myself who’d dressed in skimpy summer tank tops were warned about the low temps in the factory – the meat needs to stay fresh of course, and staying fresh requires that it stay cold. The “no bare legs” rule suddenly made sense. I was wishing I’d worn a sweater instead of a tank top.

Once we were properly kitted out, we entered the factory, which was, as promised, very cold. But surprisingly, though the first thing I saw was mounds and mounds of raw meat, it actually smelled quite pleasant. As we stood and watched, bone-in brisket made its way down a conveyor belt where a worker grabbed it and quickly and deftly cut out the trimmings, which continued down the belt, and then tossed the brisket over his shoulder to a waiting container. The brisket would be brined and cooked while the trimmings would be made into hot dogs and sausages. The men worked with lightning speed, using massive meat hoots to grab the brisket, and cutting out the trimmings with precision. The “no cameras and cellphones” rule became clear now. Given the sharp knives the men were working with, and the speed at which they worked, they didn’t need any distractions.

As we walked through the factory, I was struck how clean it seemed. While certain areas were slick with water, soap or dropping marinade and seasoning (hence, the  requirement to wear closed toe shoes), I never saw the meat or blood on the floor that I’d imagined.

Next we moved up to a large machine that was stirring the trimmings into a course mixture. The brisket trimmings would be mixed with bull meat – a higher protein, lower fat meat that was too tough on its own but gave the hot dogs just the right texture.  From there, the mix would be emulsified until it reached an almost peanut-butter like consistency and then different spices would be added depending on the type of hot dog or sausage it would become.

Some hot dogs came out skinless, others were wrapped in a natural casing. Down at the casing line we watched the workers, this time mostly women, carefully examine each sausage. Any one that was deemed not good enough was discarded. Later Bob would tell us that many of the line workers had sausages in their blood, so to speak. They’d worked the line for years, and were the children of people who had done the same. When the previous line manager left after 50 years, he made the new line manager – who had already been working there for 20 years – apprentice under him for another 5 years.

After racks upon racks of hot dogs and sausages were filled, they were moved to the smoker room to be cooked, and then sealed, packaged and shipped But before they made their way to consumers, each sausage made its way down a conveyor belt and through a metal detector. The tiniest metal shaving would set it off, and that batch would be discarded.  Now I understood the rule about no jewelry – why risk having a small metal piece somehow make its way into the meat? 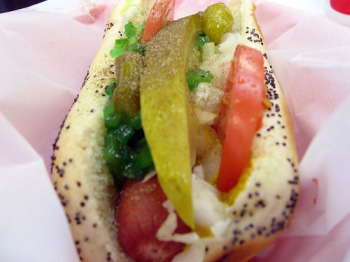 At the conclusion of the one hour tour, we had to ask Bob the million dollar question. Why are Chicagoans so insistent that you can’t put ketchup on a hot dog? I happen to love putting ketchup on my hot dogs. I usually  use about 4-5 ketchup packets per dog, so much so that my husband teases me that what I actually want is a ketchup sandwich with a hot dog for decoration. Bob’s answer: for the same reason you don’t put A-1 on a top-quality steak. You want to let the flavor and seasoning of the meat come through. Ketchup, he said, is far too acidic and overpowers everything including the meat and other toppings.

As we lined up for our free hot dog and fries after the tour, I thought about what he said. I thought about the quality of the meat that I saw going into the hot dog mix with my own eyes (and not a lip or eyeball to be seen!). I thought about the carefully measured amounts of seasoning that followed a recipe that had been around for over 110 years. And I understood why it was considered an insult to the quality and craftsmanship of the dog to smother it in ketchup. So…I only used one packet this time.

What you need to know: