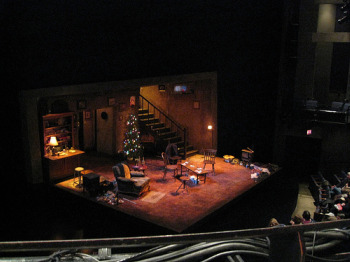 Chicago’s theatre scene may not get lumped in with London’s and New York’s, but it’s quality is just as good. The city boasts hundreds of independent theatres, over a dozen of which are located in the Loop. Some produce independent plays, traveling performances from around the world or Broadway shows (sometimes even before they hit Broadway). Here’s the rundown on the city’s best places to see a play or opera performance.

Steppenwolf Theatre
The Steppenwolf Theatre has been around for over 30 years and was formed, in part, by Gary Sinise. Over the years, its stage has been graced by actors like John Malkovich, Laurie Metcalf, and Joan Allen. Recent productions have inlcuded American Buffalo, Of Mice and Men, The Tempest and the Glass Menagerie.

Goodman Theatre
The Goodman Theatre has been producing original and classic plays in Chicago for over 80 years. Recent productions have included Animal Crackers, Ain’t’ Misbehavin, and Magnolia. A recipient of the Special Tony Away for Outstanding Regional Theatre, the Goodman is consistently recognized as one to the best theatres in Chicago.

Oriental Theatre/Ford Center for the Performing Arts
The Ford Theatre is one of the theatres that regularly hosts traveling Broadway shows in Chicago. The theatre originally opened in in the 1920’s as a movie cinema, but was remodeled and turned into a playhouse in the 1970’s. Recently, Wicked played here for several years and now Billy Elliot, the Musical, is playing.

Lookingglass Theatre
The Lookingglass Theatre presents many original plays and original adaptations. Recent productions include Around the World in 80 Days, Our Town, and Arabian Nights. The current seasons even features a play written by hometown actor David Schwimmer (of Friends fame).

Shakespeare Theatre
The Chicago Shakespeare Theatre puts on works by…you guessed it….Shakespeare. They do all the classics – The Taming of the Shrew, Romeo and Juliet – as well as lesser-known pieces. They also perform some great traveling non-Shakespeare productions and even funny takes on the Bard’s works, like MacHomer: The Simpson’s Do Macbeth.

Cadillac Palace
The Cadiallac Place is another large theatre specializing in Broadway plays that come to Chicago. Originally opened in the 1920’s, it is believed that stars such as Bob Hope, Jack Benny and Mae West once performed here. Recent productions have included The Lion King, The Producers, and The Color Purple. The upcoming season will present shows including 101 Dalmatians and Beauty and the Beast.

Lyric Opera
The Lyric Opera House produces solely operas, based on both international operas and Shakespearean plays. Current and upcoming productions include The Damnation of Faust, Carmen, and Macbeth. Considered one of the best opera houses in the world, the Lyric has been in operation since 1954.