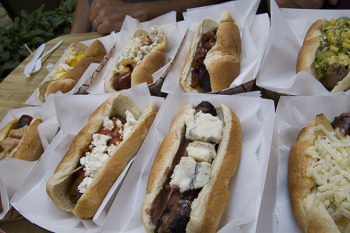 The very first time I went to Hot Doug’s, “Chicago’s Sausage Superstore and Encased Meat Emporium”, I was standing in a long line that snaked out of the building and around the corner when a car rolled slowly by. The driver leaned out the open window and yelled, “They’re just hot dogs!”

I began to get nervous. You see, not only was I potentially wasting an hour of my day for something that was “just a hot dog”, but I’d also brought along my mother-in-law. It was her first trip to Chicago and, since Hot Doug’s is a little off the public transportation grid and she had driven to the city from Detroit, I’d decided to kill two birds with one stone – a fun outing with Mom and a free ride to Hot Doug’s for me. But, what if the man in the car was right, and all these people waiting in line were wrong? What if the sausages really weren’t anything special? What if I would later be referred to by my mother-in-law as “Dan’s first wife, the one who made us wait in line two hours for hot dogs!”?

As it turns out, I had nothing to fear. The brandy duck sausage with brie and a fig reduction sauce was heavenly. The blue cheese pork sausage with creme fraiche and roasted almonds was also a winner. And the foie gras and sauternes duck sausage with truffle aioli, foie gras mousse and fleur de sel even won over my mother-in-law, who still talks about “the delicious hot dogs” she had in Chicago.

Whether you’re a local with a love for Doug Sohn’s creations or a visitor in search of some serious sausages, here are a few tips for making the most of your visit to Hot Doug’s.

Know when to go

There are good times to go to Hot Doug’s and bad times. Can you guess which category noon on a summer Saturday falls into? Weekdays, rainy day, and cold days are infinitely better times to head to Hot Doug’s. Why? Because you won’t find yourself stuck in an hour long  line outside the building. Weekdays when the shop has just opened (around 10:30 or 11am) or shortly before closing (2:30 – 3:30pm) are also good times when the line will be much more manageable. If you must go on a Saturday, try to go early.

How to get there

Doug’s is located on California Avenue, between Belmont and Roscoe. The nearest el stop (the Belmont Blue Line stop) is about a mile away. There is no direct route via bus or el to get there and it’s about 6 miles away from the city. So you’re pretty much left with three options. You can get there by car, either your own car (if you have one) or a cab, which will run you about $15 each way. You can take the Blue Line to Belmont and then walk the mile to Hot Doug’s or take the Belmont bus about 10 minutes east to California, or you can bike the six miles (or ride the el to Belmont and bike from there). Sounds like a lot of work, eh? Don’t worry, it’s worth it.

In the case of my first visit, I had my mother-in-law. For later visits I’ve brought a book to read or I’ve caught up on some overdue phone calls while  in line. Whatever you choose, bring something that will occupy you for a good 30-40 minutes, just in case. If there is a line, this will help the time pass much more quickly.

Hot Doug’s has a standard menu, but that’s really not where the best dogs live. Instead, check out the daily specials, which are always posted online. Check these out ahead of time and have an idea of what you want. There’s nothing more frustrating to the hungry people behind you than when you arrive at the counter and slowly drawl, “Hmmm, what….do…..I….want?” Make a choice in line. Have a backup ready. And bring cash. Doug’s doesn’t accept plastic.

Don’t bother with the “Chicago Dog”

There’s nothing wrong with the Chicago-style hot dog at Hot Doug’s. It’s cheap (less than $2) and tasty. But why? Chicago dogs are made with the same ingredients no matter where you get them. They taste pretty much the same everywhere. Why waste your time on something that’s just a hot dog? Go big. How about the smoked crayfish and pork sausage with shrimp remoulade and goat cheese, the cognac and hazelnut pheasant sausage with black currant dijonnaise, port wine chicken pate and truffle-balsamic cream, or even the spicy beef sausage with Coca-Cola BBQ sauce and enchilada cheese? At $6-9 each, order a few and sample. And don’t forget the duck-fat fries, which are only available on Fridays and Saturdays.