Things to do at Navy Pier 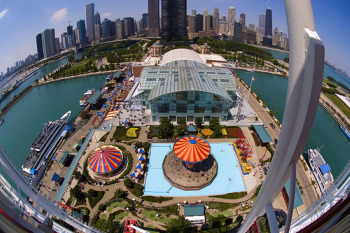 Navy Pier is one of Chicago’s largest tourist traps. During summer, it’s overrun with people – mostly large families and out-of-towners. In fact, many locals won’t even set on foot on the Pier from May to October. And that’s a shame, because despite the major kitsch factor, there are actually some great attractions at Navy Pier.

Chicago Children’s Museum
For families traveling with young kids, the Chicago Children’s Museum is a top attraction. Geared more towards younger children, the museum features exhibits that allow kids to touch, feel, create and explore. Kids can excavate dinosaur bones, get creative in the Invention Lab, make a splash in the waterways exhibit or climb a tree in Treehouse Trails. The museum offers free admission Thursday nights from 5pm to 8pm and the first Sunday of every month.

Smith Museum of Stained Glass Windows
The Smith Museum of Stained Glass Windows was the first of its kind in the US. It’s a huge hall filled with over 150 stained glass windows, including pieces from Louis Comfort Tiffany. The museum probably won’t appeal to younger children, but older kids and adults may be pleasantly surprised by the unique displays. Admission is always free, and free tours are available on Thursdays.

Navy Pier AeroBallon
The AeroBalloon floats up to 17 passengers 35 stories above the Pier. The ride last about 8-10 minutes and cost $25 for adults (kids under 12 cost $15) so it’s quite pricey, and probably a better deal for kids, who will be more impressed. The ride is seasonal and does not operate in strong winds or bad weather.

Pier Park
A mini-amusement park on the Pier, the park has a few not-so-impressive carnival type rides – a carousel and an old-fashioned swing – and a miniature golf course perfect for both kids and adults. The course is one of only two spots to play putt-putt close to downtown, so it’s actually pretty popular with locals too.

Boat Docks
Several boat tours depart from Navy Pier (as does the water taxi), offering sightseeing and meal cruises. The Windy, a registered tall ship, is also docked here and offers tours. Tours for all boats range from an hour to three or four and vary widely in price as well.

Navy Pier Ferris Wheel
The very best feature of Navy Pier is the iconic Ferris Wheel, which towers over Lake Michigan. The Ferris Wheel is nearly 150-feet tall and was built for the Chicago’s 1893 World’s Columbian Exposition. The ride only lasts about 7 minutes, but the views from the top are unforgettable.

Bike and Roll offers bike tours and rentals, Segway tours are available, and the 440-seat IMAX theater plays current releases on the Pier as well. There are also about a dozen dining options on the Pier, from chains like Bubba Gump Shrimp Co., and food court options like McDonald’s to the seasonal Navy Pier Beer Garden overlooking the water.