Taking in the View from the Willis Tower Skydeck 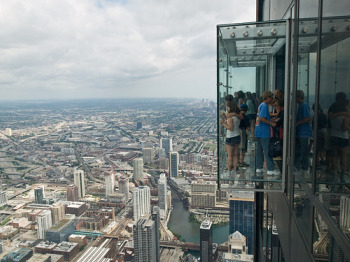 You may be wondering what the heck the Willis Tower is, and that’s normal. Most people know the tallest building in Chicago (and in the entire Western Hemisphere) by it’s former name, the Sears Tower. In 2009, U.S. Equities Management took over the lease in the building, and with it, the rights to name the skyscraper anything they wanted. Of course, despite the new name, the tower will always be known as the Sears Tower to most Chicagoans and visitors.

The main draw of this engineering marvel is the view and the observation deck at the top of the building certainly ranks among the best observation decks in the world. It doesn’t come cheap though – adult admission is $15.95 ($11 for kids 3-11). If you want to skip the sometimes considerable line, you can pay an extra $30 for a Fast Pass.

The Skydeck observation floor is located 1,353 feet above the city, and on clear days you can see four states – Illinois, Indiana, Wisconsin and Michigan. For a unique view (not for the faint of heart), check out the scene from “The Ledge“, a glass-bottomed ledge that extends four feet out from the building’s 103rd floor.

Hours: April to September from 9am to 10pm and October to March from 10am to 8pm. The best time to visit is after 5pm. The last elevator to the Skydeck leaves 30 minutes prior to closing time.

Getting there: The Willis Tower is located on the corner of Wacker Drive and Jackson Street, just east of the Chicago River. It’s about a 5-minute walk from the nearest el stop at Adams and Wells.