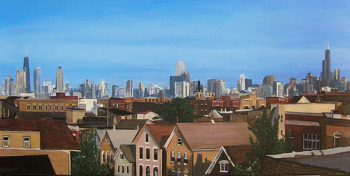 Bucktown, Wicker Park, Ukranian Village and Logan Square all seemed to get lumped together by many Chicagoans. The group of neighborhoods lies along the el tracks of the Blue Line, about a 10-minute ride from the Loop. The areas started out as Polish working class in the mid-1800’s and later became predominantly German. Puerto Ricans and African Americans moved in during the 1970’s and 80’s. The neighborhoods were a little grittier and crime was prevalent then, particularly between rival gangs.

Though there are still some pockets where it can be a little dangerous, these areas have really cleaned up in the last decade or so. Of course, now many of the area’s residents complain that the area has become too gentrified and “yuppified” and has lots some of its edge. The fact that rent prices have gone up has undoubtedly contributed to the annoyance.

Of these areas, most tourists will head to Bucktown, which is bordered by the Chicago River to the east, Western Avenue to the west, and Fullerton Avenue to the north. Along the lines of the el, the area is home to many bars (particularly cheap dive bars) and newer, trendy restaurants and shops. The further you get from the el though, the more residential the area becomes, and it can be hard to get around without a rental car or by calling a taxi.