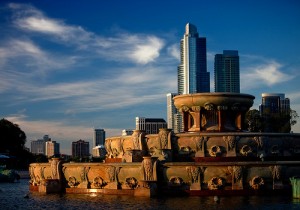 August in Chicago is typically hot, sweaty, sticky and crowded. Along with July, it is one of the peak months for tourism in Chicago. And it’s no wonder. Despite the heat, the city comes alive in summer, with hot days perfect for cooling off at the beach or sweating through a run along the Lakefront path, and sultry nights spent listening to live music in Grant Park, or consuming cold beers on a rooftop deck.

Though you’ll find the occasional chilly day, most days are hot, sunny and humid, with only slightly less hot nights. Average highs are 83°F, with average lows at 65°F, though the month does bring a few hot spells when temperatures can soar into the 90’s (and local wish for a few cooling rainstorms for relief).

There are so many things to do in Chicago in August, and you can take your pick from activities that help you beat the heat or those that help you embrace it. Cool down on one of the city’s beaches, shop for in-season produce at local farmers markets, see the Cubs play at Wrigley Field, dance at a street festival, run along the lake or kayak in the Chicago River.