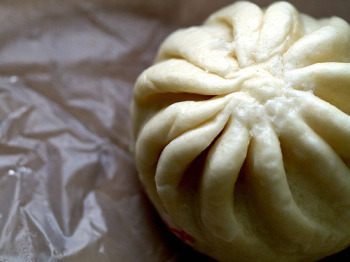 Dining on a budget in Chicago is easy. With a plethora of BYOB restaurants and cuisines from around the world represented, you can eat well and still save some cash. Here are some of the best budget-friendly options in the city.

These places make for a great cheap lunch or a casual dinner. Don’t expect much in the way of service or decor; they tend to be no-frills establishments with a focus on inexpensive, delicious food.

Urban Belly
Located in Avondale (and hence, a bit out of the way for those traveling without a car), Urban Belly offers a small number of seats in a surprisingly chic space. The most expensive noodle dishes – ramen with pork belly and udon with shrimp – are $13. Dumpling and rice plates like lamb and brandy or short rib and scallion are $7-8 each.

Wow Bao
There are three Wow Bao locations around the downtown area – in the loop, on the Magnificent Mile, and in the theatre district. Each offers breakfast baos, potstickers, and bowls. Single baos, which make a filling snack, or six-packs (which can serve as a light lunch for two people) are $7.99 and combos that include baos or potstickers and a salad or noodles are the best deal at $5.99.

Hot Doug’s
Hot Doug’s takes some effort to get to, and the offerings there certainly aren’t as cheap as other Chicago-style hot dogs in the city, but for some haute cuisine sausage at a low-price, it can’t be beat. Selections include sausages like smoked crayfish and pork sausage with shrimp remoulade and goat cheese or cognac and hazelnut pheasant sausage with black currant dijonnaise, port wine chicken pate and truffle-balsamic cream. Prices range from $6-9 each.

Billy Goat Tavern
Remember the old Saturday Night Live “Cheezeborger, cheezeborger!” skit? Well, that was based on the Billy Goat Tavern. Located below Michigan Avenue, it’s been a Chicago institution since 1934. The Billy Goat serves a cheap breakfast (omelette, hashbrowns and toast for under $5) until 11am, but the real draw is the cheeseburger, which will set you back under three bucks.

Wiener’s Circle
During the day, the Weiner’s Circle offers a casual spot for hot dogs, burgers, and cheese fries, with a small counter space and outdoor picnic tables. At night, it becomes a must-stop for the throngs of tipsy revelers leaving the bars (and in summer, the Cubs games). At these times, it’s not a place for the faint of heart (or for kids) as the staff and patrons engage is some pretty hardcore banter and trashtalk – all part of the shtick.

Crisp
Located on Broadway in Lakeview, Crisp serves up some spicy Korean chicken in a variety of forms. Hearty bowls and giant half-chicken sandwiches range from $6-$9 and come in flavors like Seoul Sassy, Mild, Spicy, and Suicide.

Lito’s Empanadas
Just outside of the park, in Lincoln Park on Clark, Lito’s serves one thing and one thing only – empanadas. Each one is under $2.50 and fillings include beef, chicken, bbq chicken, spinach, Hawaiian and vegetarian. There are even dessert empanadas like choco-banana and apple cinnamon.

Frontera Fresco
For those who can’t bear to wait in line at celeb-chef Rick Bayless’ Frontera or Topolobampo (or to pay the higher prices), Frontera Fresco is a cheaper, quicker option. Located in the Macy’s on State Street, it’s a perfect spot to stop for lunch after a shopping binge. On offer are tacos ($6.95 for two), tortas, flatbreads, quesadillas, tamales, soups and sides. Nothing is over $7.95, and most items are less.

Smoque
Arguably the very best BBQ in Chicago, Smoque is easy on the wallet as well. The menu is small, but excellently executed. Ribs, pulled pork, smoked brisket, chicken and Texas sausage are the only meats offered, along with sides of coleslaw, salad, mac n’ cheese, BBQ beans, fries and cornbread. A full rib meal will set you back about $20; all other plates top out at just ten bucks.

XOCO
Another Rick Bayless creation, XOCO offers a twist on traditional Mexican street food – tortas, soups, salads, and sides, plus an extensive array of hot chocolates served with churros, near the Merchandise Mart in River North. Most plates range from $8-10. 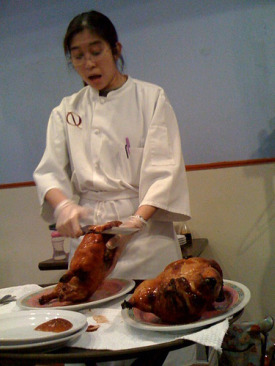 For cheap sit down service, you generally can’t go wrong with a moderately priced BYOB. Bring your own drinks, and your overall costs are even lower than at a place with liquor service

Sun-Wah
Located a bit farther north of the city (in Uptown, and easy accessed via the Red Line), Sun-Wah offers what might be the best Peking duck outside of Asia. At it’s priced at a steal – the off-menu Peking duck meal is just $32. One duck can easily feed 2-3 people (4 if you order an extra appetizer or two) and includes a full duck with crispy, crackling skin carved table-side. The first course is duck with fresh bao buns, the second is duck soup, and the third is duck in duck-fat-fried noodles (the best option) or rice.

Toro Sushi
Toro Sushi, located in Lincoln Park, is one of the few BYOB sushi restaurants in the city. Owner and sushi chef Mitch greets every customer at this small, intimate space, and if you sit at the counter, he just might make you a few custom rolls based on your preferences. Rolls range from the familiar (California, spider) to the unusual (bbq chicken or tuna with mozzarella cheese) but all are delicious and made with only the freshest, highest quality fish.

Rique’s
GQ once called Rique’s, a Mexican restaurant located in the Korean area of Uptown, one of the best in the nation. It’s not your typical Mexican joint – chips are served with black beans instead of salsa and you can bring your own wine, beer, or even tequila and margarita mix for major savings. Most dishes, like chicken in a spicy mole or a smokey tinga sauce, are $10-$12 each.

Tac Quick
For quality, authentic Thai food, Tac Quick is a winner. Set underneath the Sheridan Red Line el tracks in Lakeview, this BYOB restaurant offers classics like pad Thai and pad see ew, plus a “secret Thai menu” or more exotic offerings such as duck sausage and papaya salad with salt crab. Most dishes are under $10.

Pizza Rustica
Craving some pizza, while others in your party want pasta? Compromise on Italian without spending too much by going to Pizza Rustica. This cozy BYOB feels just like an Italian trattoria and serves huge pizzas with doughy crusts featuring toppings like Italian sausage, mushrooms, pineapple, artichokes or spinach. Salads are heading and pasta is made by hand. Pastas are around $10 each, and large pizzas that serve 4-6 people are under $25.